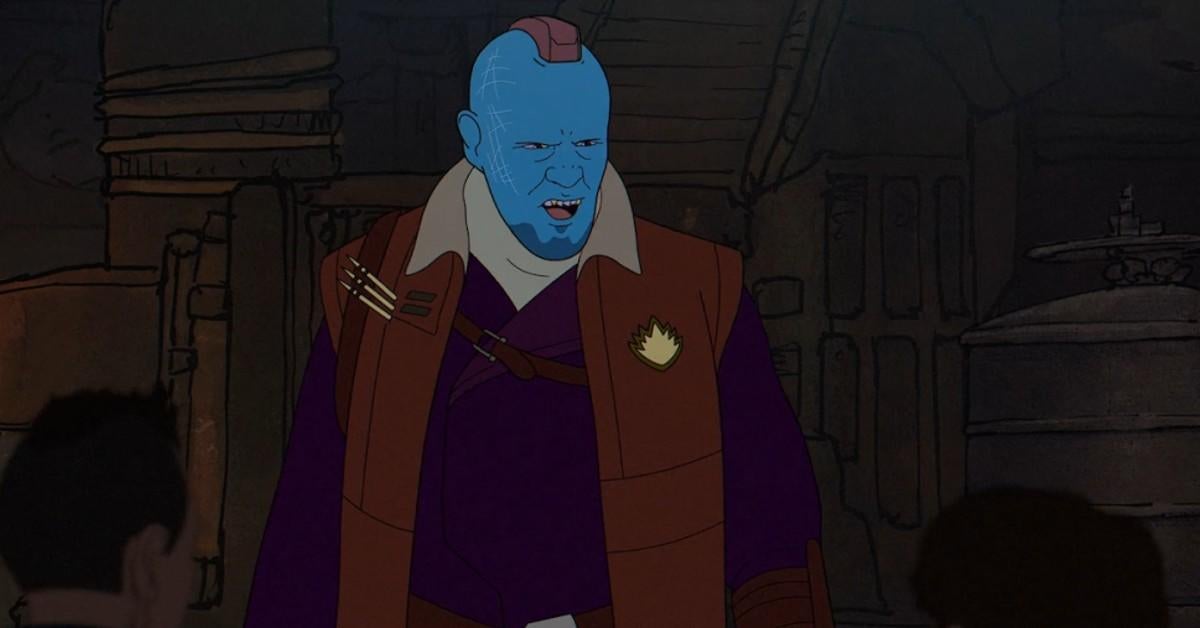 “For the #GuardiansoftheGalaxyHolidaySpecial, we used old-school rotoscoping animation in the style of the Ralph Bakshi films I liked growing up – and to give us that 1970’s & ’80’s nostalgic Christmas Special feel,” Gunn shared on Twitter. “We filmed actors Luke Klein, Michael Rooker & @seangunn & traced over the footage frame-by-frame. Luke’s features were altered to more closely resemble young Peter, Rooker’s fin was added & Sean was reduced in size to his younger self – great work from @StoopidBuddy animation.” You can check out the photo of Rooker on set below:

For tea #GuardiansoftheGalaxyHolidaySpecialwe used old-school rotoscoping animation in the style of the Ralph Bakshi films I liked growing up – and to give us that 1970’s & ’80’s nostalgic Christmas Special feel. pic.twitter.com/udYmYGpHvV

Who Dies in Guardians of the Galaxy Vol. 3?

It’s likely Yondu won’t be the last Guardians of the Galaxy character to die in Gunn’s trilogy. Gunn previously confirmed that this will be the last film to feature the original Guardians crew, and he’s also hinted that there will be some major deaths in the upcoming movie. Many fans have guessed that Rocket will be the one to meet his end, but nothing has been confirmed. During a recent interview with ComicBook.com‘s Phase Zero host, Brandon Davis, Gunn teased an emotional ending for Rocket.

“[The Guardians of the Galaxy Holiday Special] is also very, very different than Volume 3 because Volume 3 is a really a very emotional movie,” Gunn explained. “And it tells this story about Rocket and where he came from and where he’s going, and how that ties into everybody else, and the end of this iteration of The Guardians.” He continued, “So, doing this goofy thing like once every four days, and then going and shooting four days of Guardians Vol. 3, and then going back, it almost created a lot of whiplash. But it was also almost like The Guardians of the Galaxy Holiday Special days were like snow days, you know? Those were the… that was recess. That was fun!”

“Well, I’m always trying to be balanced with these things, so I think it’s wonderful,” Gunn explained when asked if the special is required viewing for the third film. “People should see the Holiday Special. You’re obviously gonna learn a lot about where the Guardians have been in the past few years. You know, you’re gonna see how they now inhabit Knowhere. They’ve got a new ship called the Bowie. They’ve got a dog [who] is part of their crew now who has telekinesis named Cosmo. So where you get to learn all that, and then there’s a couple of bigger pieces of spoiler-y lore. You’re gonna learn all of those things. In a way, the Holiday Special was a Trojan Horse for me to sneak in stuff that becomes important in Volume 3so I don’t have to spend a lot of time at the beginning of that movie explaining it.”