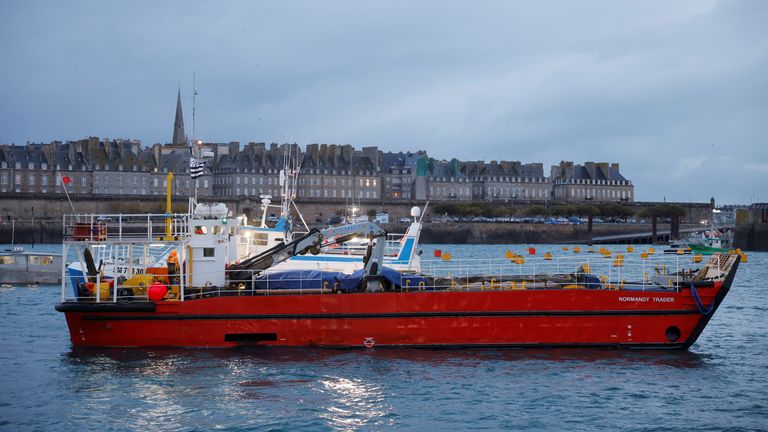 French fishermen barricaded a boat in the port of St. Malo this morning as they started a day of protests over post-Brexit fishing rights.

According to Reuters, the Jersey-based vessel Normandy Trader was prevented from leaving the port of Brittany.

There are also plans for fishermen to block The Channel Tunnel and the port of Calais later today.

The series is centered around French fishermen demanding that Britain issue more licenses to fish in British waters than what Westminster says was agreed in the post.Brexit trade agreement.

To obtain a license, fishermen must be able to show that they have worked in British waters in recent years.

Some of them on the French side have not been able to present this evidence – which would also give access to waters around the Crown Dependency of Jersey.

A similar agreement is in operation for British vessels to work in French waters.

French authorities briefly seized a British fishing boat that was in its waters last month and took it back to one of their ports.

In a speech ahead of today’s action, Gerard Romiti, chair of the National Maritime Fisheries Committee, said: “This is our demonstration of the quality and ability of professional fishermen to mobilize in response to Britain’s provocative, contemptuous and humiliating attitude towards them.”

A Downing Street spokesman said the government was “disappointed with threats of protest activity”.

He added: “It will be a matter for the French to ensure that there are no illegal acts and that the trade is not affected. We continue to monitor the situation closely.”

This is not the first time French fishermen have tried to intervene directly.

In April, the lorries transporting fish from British waters to processing centers in France.

And the British Navy sent two patrol boats in May when French boats blocked Saint Helier harbor in Jersey.

The tension comes as the British and French governments seek to find a way to solve the problems that lead to it 27 channel deaths Wednesday.

A Dover Port spokesman said they were aware of the potential for a “limited period of disruption in France”.

They added: “The port will be open for business as usual and has tried and tested plans in place to deal with temporary interruptions of services across canals should they occur.

“We would encourage all customers traveling to allow a little extra time for their journey and check with their chosen ferry operator for the latest updates.”