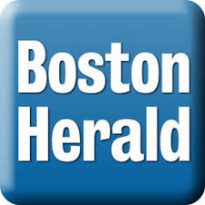 QUINCY – There was certainly a sense of urgency up and down the North Quincy sideline, but none of the desperation during yesterday’s 89th annual showdown against Quincy.
The Raiders fell behind early 12-0 against their rivals only to roar back with a couple of late goals for an exciting 15-12 win at Veteran’s Memorial Stadium. Running back Hunter MacIssac broke for a 6-yard score on the final game of the third quarter, and the Red Raiders (5-5) took advantage of two huge pass interference calls and a 10-yard scoring by quarterback Cooper Hansen to Nate Caldwell to hit a 12 -play, 96-yard drive for the win with 1:22 left to play.
“We’re a very robust team and we’ve been down before, but we know we have a pretty good football team and Quincy played very well,” said North Quincy head coach Ryan Craig. “We just told them we were only going to make one game at a time. There’s always a sense of urgency. When you’re down by two points and someone tells you differently, they’re lying.”
Quincy (4-6) put the skits on a first quarter drive when Rily O’Connell regained a fumble on North Quincy’s first possession. After a pointless opening quarter, the Presidents took a 6-0 lead when quarterback Drew Boretti (152 yards pass, two touchdowns) hit Jacey Ham with a 52-yard stroke down the right sideline with 6:54 left in the half. The Presidents went up 12-0 with 5:57 left in the third when Boretti struck again, this time to Clayton Corley, who was a model of concentration who pulled a pass over his shoulder for a 14-yard scoring.
Back Matt Craig, who finished with 100 yards rushing, had three runs on 23 yards before MacIssac put the Raiders on the board. Murray’s point-after-kick made it a 12-7 competition. Quincy again threatened with just over 7 minutes left on a Jarod Walker rush, but Cydney Green made a fantastic tackle in open field to drop him to a 2-yard loss.
Caldwell’s big touchdown catch gave North Quincy the win and a 49-35-5 in the city school Thanksgiving rivalry. “There is no game that will give you two goals,” Craig said. “You get the first one, and then you work to get the next one.”