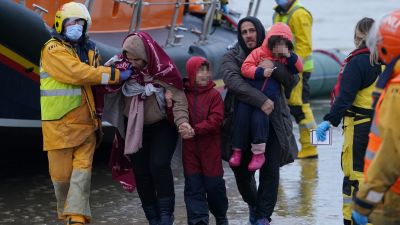 Children have been pictured among those crossing multiple canals to the UK.

Groups of people – some wrapped in blankets and adults with young people – arrived in Kent on Saturday.

The Ministry of the Interior has not yet provided figures for the recent small boat crossings.

The arrivals came when it was reported that asylum seekers will have to obey strict rules in new centers or face their demands being rejected under plans proposed by Interior Minister Priti Patel.

Kevin Saunders, former chief immigration officer for the UK Border Force, argued that people arriving in the UK via the canal should be treated offshore.

He told Times Radio: “The most effective way would be to take all the people who have arrived in the UK to an offshore treatment center and deal with it offshore.

“It’s the only way you want to prevent people from coming to Britain. We’ve seen attempts to do it with the French on land, on the canal, nothing works.”

Asked why it should be offshore, he said: “People will still come to the UK because they know we will not be able to remove them from the UK when their asylum application fails.”

And he described a number of the ideas that came into the headlines as “amazing.”

It comes after Sir Keir Starmer accused Mrs Patel of not living up to promises to stem the flow of illegal migrants crossing the canal.

The Labor leader said she had not secured strong enough agreements with the French government to prevent migrants on the dangerous sea voyage.

He said the interior minister repeatedly used “strong language” to say how she would tackle the problem, but delivered “absolutely nothing.”

His attack came when Mrs Patel accused the EU’s open borders – established by the Schengen Agreement – of failing to control the movement of people through the bloc.

More than 24,700 people have arrived in the UK so far this year after crossing the Channel in small boats – almost three times as many as in 2020.

It is believed that at least 10 migrants have died in the last few weeks while trying to cope with the dangerous passage.