Sales of marijuana in Colorado continued to decline in September, according to the State Department of Revenue, as sales of recreational and medical marijuana together totaled just over $ 181.1 million.

Sales of marijuana fell on an annual basis over the summer for the first time in seven years, and that decline continued into September, according to DOR data. Cannabis business owners believe that self-isolation, government stimulus payments, and temporary unemployment benefits during the start of the COVID-19 pandemic provided an unusual boost to marijuana sales; the figures for the last half of 2021 could mark a return to Earth.

Governor’s Office of State Planning and Budgeting had predicted slower sales ahead in its latest quarterly economic forecast, pointing to declining home consumption as Coloradoans left their homes.

The $ 1.7 billion in marijuana products sold from the beginning of the year to September still put 2021 on track to beat last year’s numbers, but the current sales pace may cause year-on-year totals to close.

As of September, Colorado dispensaries have recorded over $ 11.7 billion in sales since the start of 2014, the year recreational sales began, according to DOR data. Over the same period, the state of Colorado has raised $ 1.95 billion in marijuana tax revenue, of which over $ 500 million goes to public school programs and construction. 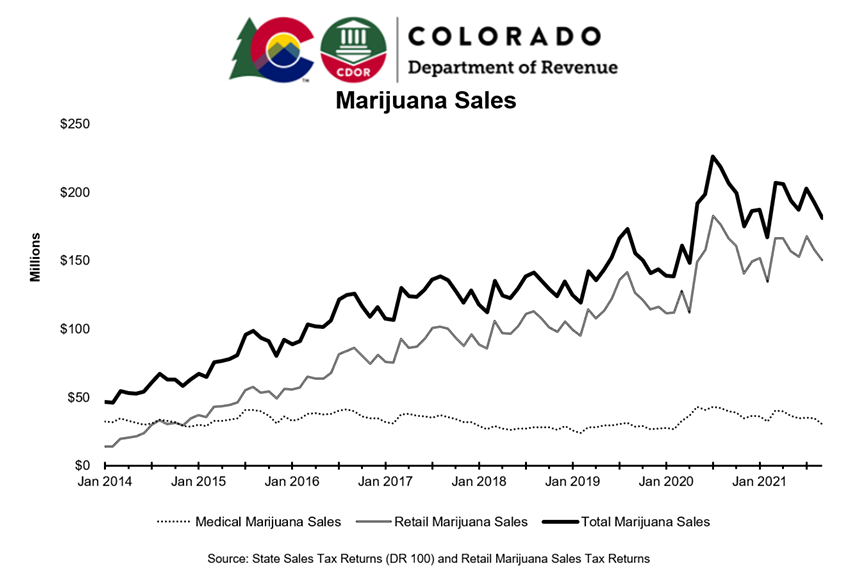