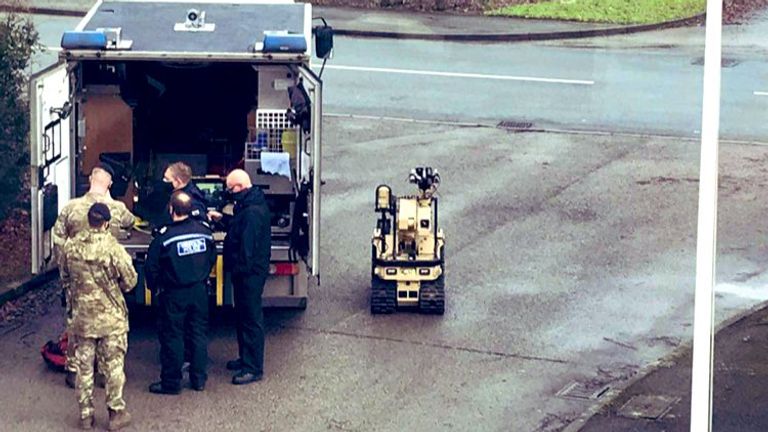 A man with an “obsessive” COVID-19 interest has been jailed after triggering a bomb scare at a vaccine factory.

Anthony Collins, of Kent, stopped the production of Oxford-AstraZeneca vaccine at a factory in Wrexham, Wales, after sending a suspicious package that had to be detonated by experts in bomb disposal.

The Army’s Explosive Ordnance Disposal (EOD) unit was sent to Wockhardt plant on 27 January, where a total of 120 people had to be evacuated.

X-rays showed that the package contained equipment that could be used to make an explosion, such as electrical wires, and a robot was used to move it to a safe place.

Only after the package had been destroyed behind a 100 m barrier could the officers be sure that it did not contain explosive material.

Instead, a number of items were retrieved from the package, including a calculator, a letter addressed to Collins, pages from a scientific book, and a receipt from Tesco.

CCTV, which captured the supermarket transaction, was caught by police and showed Collins buying the items on his own.

The 54-year-old, from Chatham, Kent, also sent similar packages to 10 Downing Street, a laboratory in Wuhan, China, a US air base in Gloucestershire and what appeared to be the leader of North Korea, a court heard.

While in custody, Collins admitted to sending the package, but denied that he intended to create a bomber, claiming instead that he believed the items would be useful to people working in the factory.

He noted, however, that he knew his actions could cause alarm, and he was found guilty of posting an article with the intent to provoke the belief that it was likely to explode or ignite.

During his trial at Maidstone Crown Court, the jury was told that Collins had developed an “obsessive interest” in COVID-19 and vaccines.

Defense attorney Janice Brennan said Collins had been diagnosed with a personality disorder and has had an “obsession” with sending letters and packages for about 30 years.

She added: “He is a lonely and bored person who has a very hard time dealing with normal life.”

Judge David Griffith-Jones QC told Collins: “A compulsion to send bizarre communications to various bodies or authorities is one thing and can be considered a harmless idiosyncrasy.

“It does not explain your behavior here, which was deliberately sending a bomb scam, knowing that it would cause fear and chaos.”

Collins was sentenced to 27 months in prison and the time he has already spent in custody must be deducted.