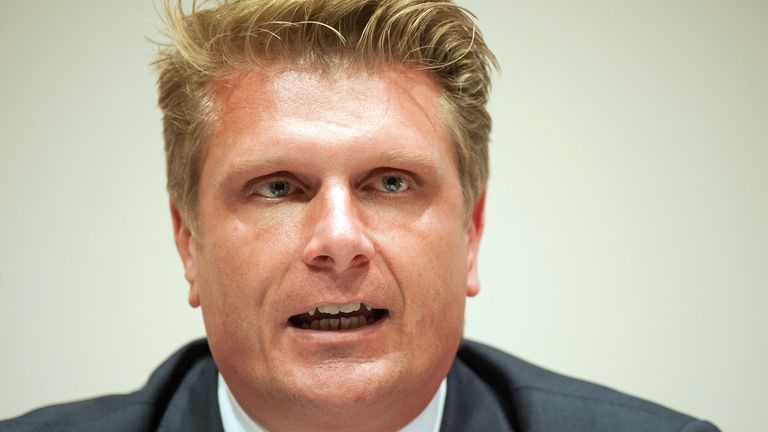 Germany’s tourism commissioner says he expects COVID-19 vaccines to become mandatory in the country as cases rise there and elsewhere in Europe.

Thomas Bareiss said the increasingly deteriorating situation in his nation makes it clear that sooner or later coronavirus vaccinations will be mandatory and will be “inevitable”.

He said it was wrong not to make COVID jabs mandatory from the start – but the decision not to at that time was “understandable”.

Neighboring Austria has said that vaccines will be mandatory from 1 February.

More restrictions are being introduced across the continent as infections increase and winter sets in.

Austria and the Netherlands have gone back in terms of lockdown, triggers unrest in the last couple of days.

The states of Germany are also to impose restrictions, where some regions cancel their Christmas markets or ban the sale of alcohol.

The nationwide seven-day rate of infections is currently at 362.2 per. 100,000 inhabitants – with the peak during last year’s lockdown of 197.6. A number of states have a much higher figure than the national average, including Saxony at 793.7.

He told the German news agency DPA: “In retrospect, it was wrong not to see it (compulsory vaccinations) right from the start. The hope at the time is understandable, but it was not realistic.

“For me, it is no longer politically justifiable for entire industries, retailers, restaurants, clubs, bars and the entire cinema, culture and events scene to live in a state of crisis, as prescribed by the state for 20 months, and to face great existential fears. , while others … take the liberty of not vaccinating. “

And Daniel Gunther, the CDU prime minister for the Schleswig-Holstein state, told Die Welt that he would be prepared to introduce a mandate – and that ordinary lockdowns are no longer “appropriate” as they were before the vaccinations.

Tilman Kuban, head of the youth wing of the CDU, said: “We need de facto mandatory vaccination and a lockdown for the unvaccinated.”

The CDU is not expected to be part of the ruling coalition in December, as the center-left Social Democrats (SPD), the Libertarian Free Democrats (FDP) and the Greens are all negotiating to form a government – with the SPD’s Olaf Scholz expected. to take over as chancellor.

He wants to debate mandatory jabs for health workers – similar to the situation in the UK – although the FDP is against this as they are more ideologically supportive of individual freedom.

“We are fortunate that in this country, even though we have hesitations about vaccines, it is much lower than we see elsewhere,” he told the BBC’s Andrew Marr Show.

“I just think on a practical level that taking a vaccine should be a positive choice. It should be something. If people are a little reluctant, we should work with them and encourage them.

“In terms of mandatory vaccines for the general population, I do not think that is something we would ever look at.”

According to the Johns Hopkins University tracker, 69% of the British population is fully vaccinated, while 68% of Germans are double-vaccinated.

England ‘fixed’ in COVID Plan A

Mr Javid told Sky News that England is still well within the Government’s Plan A – and the country is “not in the process of taking further action” as the increased requirements to wear the mask and work from home set out in Plan B.

He added that England decided to open more than other countries in the summer – which Mr Javid said was the “best” and “safer” time to do so.