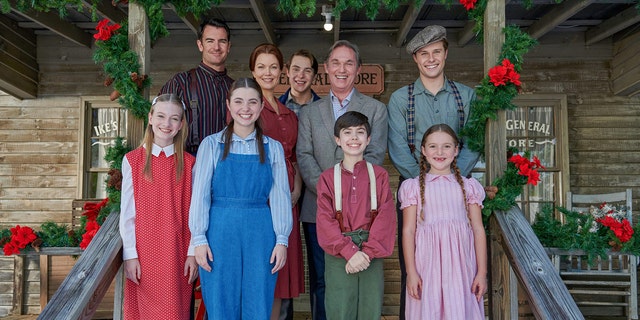 The Walton family is back.

The CW is celebrating the 50th anniversary of “The Homecoming: A Christmas Story” by airing a new TV movie titled “The Waltons’ Homecoming,” which premieres Nov. 28. The 1971 film first introduced “The Waltons” to audiences, leading to a successful series that is still celebrated today.

Richard Thomas, who starred as the original John-Boy Walton, will act as the narrator on “Homecoming” instead of the late Earl Hamner Jr., passing the torch to Logan Shroyer.

“The Waltons’ Homecoming,” which is described as a “healthy and warm-hearted holiday film that emphasizes the importance of family and kindness,” also stars Bellamy Young, Ben Lawson and Marcelle LeBlanc.

Thomas told Fox News that he is thrilled that the beloved series will get the restart treatment in time for the holidays.

“My opinion is that ‘The Waltons’ is a 50-year-old classic,” the 70-year-old said. “Classics will eventually be adapted, updated, remade and re-evaluated. I’m just glad our show is in that category, and I hope the new version finds its audience, as ours did in 1971. Good luck them.”

The original CBS family drama, which focused on the life of a mountain family in Virginia in the 1930s and 1940s, aired from 1972 to 1981. It is believed that the network greened the series in response to hearings in Congress about the lack of family-friendly programming .

Although the show initially did not affect the audience, it quickly became the second best rated series in the entire prime time of season 2, Forbes reported. During its nine seasons, it won 13 Primetime Emmy Awards, two Golden Globes and a Peabody Award – just to name a few. Six made-for-TV movies were launched after the series ended.

Former cast members from left to right: Kami Cotler, Richard Thomas, Eric Scott and Judy Norton pose during the screening and reception to celebrate ‘The Waltons’ Homecoming’ at The Garland on November 13, 2021 in North Hollywood, California.
(Photo by Kevork Djansezian / Getty Images)

Many of the original cast members told Fox News that they fully supported the reboot. They hope it will introduce the family to a new generation of viewers. Ralph Waite, who served as the beloved patriarch John Walton Sr., died in 2014 at the age of 85.

“I support everything that puts our co-actors to work,” said Michael Learned, who starred as matriarch Olivia Walton. “‘The Waltons’ is about family, which is timeless. I was invited to a preview. However, an emergency in the family kept me from attending. I love each member of the original cast as if they were my own. Best wishes for a new cast. “

“I have not seen it yet, but I look forward to seeing it,” said the actress / writer. ‘I hear lovely things about the new’ Homecoming ‘. Looking forward to seeing the new ‘Erin.’ Many Walton fans have been asking me for years why there is not a show like ‘The Waltons’ to share with their kids. Now there are. I think it’s time for a fresh family show. “

Judy Norton, who played Mary Ellen Walton, said curious viewers should not expect a copy of the original show. However, she stressed that the new TV movie honors Hamner’s dedication to the family. She also noted that the network, along with the new cast, has respected the program’s legacy during filming.

“Think of it as having a new stepparent,” the actress explained. “They are not meant to replace your parent, but to be a different part of your life. Although we appreciate all the love and support our viewers have given to ‘The Waltons’ over the past 50 years and hopefully many more years. in the future – feel free to embrace this new rendition – not as a copy – but as something new. “

Actors Michael Learned and Ralph Waite attend the signing of Mary McDonough’s book ‘Lessons From the Mountain: What I Learned From Erin Walton’ at Book Soup on April 16, 2011 in West Hollywood, California. Waite died in 2014 at the age of 85.
(Photo: Brian Putnam / FilmMagic)

The 63-year-old said now is the perfect time to revisit a story like “The Waltons”.

“The story of love, family and each other’s support is timeless,” she said. “The show is about the human spirit. Man’s innate kindness and compassion when demonstrated at its very best. Something we can all achieve – together. This show gave me so much, but what I value most is the ‘family’, it has given me. “

Kami Cotler, who played the young Elizabeth Walton, attended a screening for “Homecoming.” She acknowledged how many fans have expressed hesitation in watching the film for fear the CW is trying to replace “the original family.”

“I do not think there is anyone replacing anything,” she explained. “I think the reboot pays homage to the timelessness and beauty of Earl Hamner’s story. Also, if people want to see more shows like ‘The Waltons’ on TV today, then I recommend giving The CW’s ‘Homecoming’ a try. “That’s the way to tell Hollywood that there’s a family programming market.”

“… I urge people on my Facebook page to be aware of how they post about the remake,” the now educator continued. “The producer grew up with ‘The Waltons’ and wanted to bring a hot holiday film to the screen. Let’s trust that they did the best they could with the resources available. These are sweet people and there’s always a chance, that the filmmakers or actors – including the kids – will read your comments, so remember to be kind with your words! “

Jon Walmsley, who played Jason Walton, said he’s not surprised “The Waltons” would be remade. The talented instrumentalist said he enjoys watching reboots of his classic favorite movies.

“I’ve seen all four versions of ‘A Star is Born’ – each one is different and they are all amazing,” he boasted. “The fact that Earl Hamner’s characters and stories last 50 years after they were written is a testament to the quality and timelessness of his writing.”

The 65-year-old said he would even be open to taking on a role if the new TV movie led to a sequel or series. Forbes teased that if enough viewers tuned in, a regularly scheduled series could be possible along with guest appearances from some of the original actors.

“It will depend on the role,” he said. “But I would love to play a villain, a character who was the opposite of Jason, my original ‘Waltons’ role.”

The original cast has been close over the years.

In 2017, 15 former cast members went to Virginia for a reunion at the Waltons Mountain Museum. The events also coincided with the one-year anniversary of Hamner Jr., the show’s creator. The native Schuyler died in 2016 at the age of 92.

“Incredibly, we’re all still close, which’s a rare event on television,” Walmsley said. “Usually a show ends and everyone goes their separate ways. We meet regularly for fan events or weddings or funerals, and lately at Zoom – just like real families. It’s always nice to meet for a drink, a hug. . and talk about what our children are doing. “

‘WALTONS’ STAR JUDY NORTON REFLECTS ON LIFE AFTER THE HIT SERIES, REJECTS HER A GREAT ANNIVERSARY

Today, he’s eager to see how the audience will react to “Homecoming.”

“I think the CW hopes to be able to offer a program that families can watch together,” he said. “In 1971, most families had one television. Now everyone in the family has their own television, not to mention computers and cell phones. ‘The Waltons’ not only provide an opportunity for family views, but hopefully a window into a time where multi “Generation families spent a lot more time together.”

‘The Waltons’ Homecoming’ airs Sunday, November 28 at. 20.00 ET on the CW. The Associated Press contributed to this report.