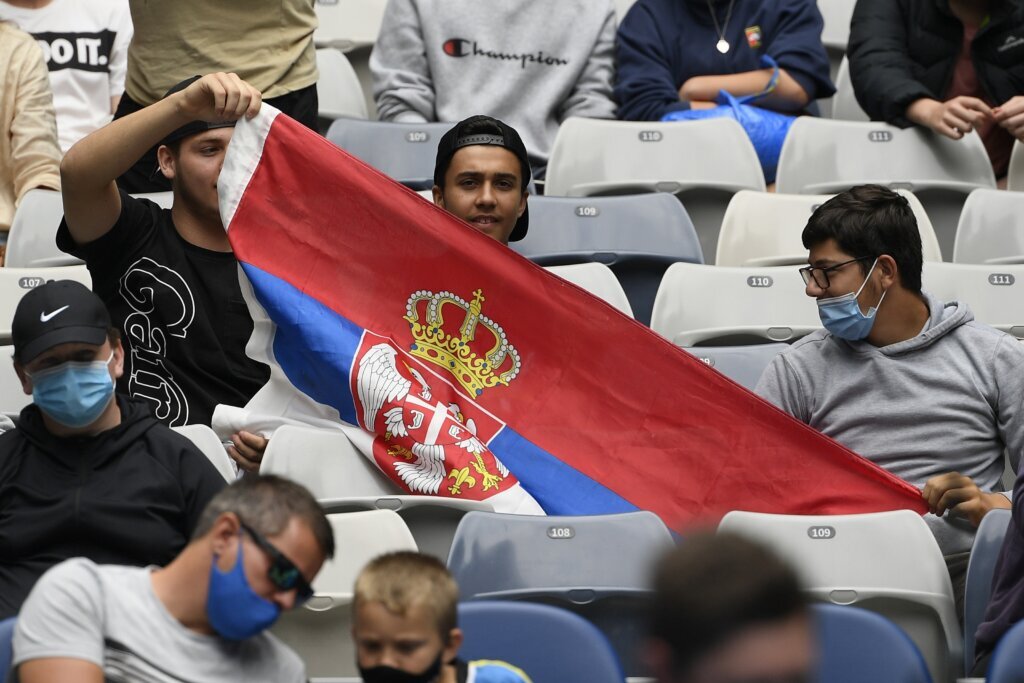 MELBOURNE, Australia (AP) – To some, it looked like a cloud had been lifted from the Australian Open. For others, Novak …

MELBOURNE, Australia (AP) – To some, it looked like a cloud had been lifted from the Australian Open. For others, Novak Djokovic was still almost palpably present, the name on everyone’s lips on the opening day of this year’s first major tennis tournament.

Djokovic left Australia late Sunday as he failed to overturn his visa cancellation due to his lack of COVID-19 vaccination. His flight from Melbourne landed in Dubai early Monday, just as the first matches of the tournament began.

As the number 1 ranked male player and three-time defending champion, Djokovic would have been the marquee attraction of the tournament. In absentia, he still exerted an overall influence on the opening day.

Fucsovics had angered Djokovic’s supporters before the tournament when he criticized Djokovic’s unvaccinated status, saying “people’s health is paramount and there are rules outlined months ago that everyone should vaccinate themselves and Djokovic did not.

“From this point of view, I do not think he would have the right to be here.”

Djokovic received an exemption from the vaccination rules for playing in the Australian Open, based on a coronavirus infection in mid-December. But on arrival, border officials said the exception was not valid and moved to deport him – triggering a 10-day legal battle and an ongoing political drama.

After his victory at Melbourne Park, Lajovic displayed a Serbian flag adorned with Djokovic’s picture and the words “like it or not, The Best of All Time.”

Former world number one coach Andre Agassi, Lleyton Hewitt and Simona Halep told Nine Network “there has been a cloud hanging over the players.

“I completely reject these comments and do not apologize for the application of the rules here in Australia around our border protection policies that have helped keep us safe,” Frydenberg said. “It does not matter if you are the number one tennis player in the world or Betty from Utah. If you are unvaccinated, the same rules apply and that’s what applies here.

“The Australian Open … is a fantastic celebration of tennis and it is much bigger than an individual player.”

Opinions remained divided around the world about the No. 1 men’s tennis player and whether he should have been allowed to compete in the Australian Open despite not being vaccinated against COVID-19.

At a tennis center in Phoenix on Sunday, employee Stan Taylor said the lobby filled with only one question when players arrived: “What do you think of Novak Djokovic?”

There was no consensus on whether the No. 1 men’s player had tried to play the system by seeking an exemption from Australia’s strict vaccination rules or was entitled to defend his title at the Open. Eventually, the country’s immigration minister revoked his visa out of public interest, and Djokovic was deported on Sunday.

Taylor said he knows Djokovic has favored unconventional approaches all his life, but he wanted to see the tennis star show leadership in the polarizing COVID-19 vaccine debate.

“I love watching him fight,” said Taylor, who lives in Phoenix and has followed the saga closely. “I’ve seen him snatch the victory from the mouth of defeat.…. So he loves the game, but this thing was nothing to get on the soapbox about. He chose the wrong match and he lost.”

Djokovic has overwhelming support from his native Serbia, whose president said Australia embarrassed itself and urged its compatriot to return where he would be welcomed.

The tennis player has also been hailed as a hero by some in the anti-vaccine movement. A protester raised a poster in support of the tennis star at a rally in the Netherlands on Sunday.

Others were quick to criticize. One of Italy’s greatest tennis players, Adriano Panatta, called Djokovic’s expulsion from Australia “the most natural epilogue of this affair.”

“I do not see how Australia could have given the visa. He made big mistakes, he created an international case when he could have done without it,” Panatta told Italian news agency LaPresse.

“I know too little to judge the situation,” she wrote on Twitter. ‘What I do know is that Novak is always the first to stand up for the players. But none of us stood for him. Be strong.”

British player Andy Murray said he hoped such a situation would not be repeated at the next tournament.

It is not clear where Djokovic will play next, and he is defending champion at the next planned major, the French Open in May-June.

At this stage he could still play – if the virus rules are not changed before then. French Sports Minister Roxana Maracineanu confirmed earlier this month that Djokovic would qualify for a “health bubble” that allows unvaccinated players to train and play.

The same could be the case for Wimbledon, where he is also defending champion. England has allowed exemptions from various coronavirus rules for visiting athletes if they stay at their residence when not competing or training. The American Tennis Federation, which is holding the US Open, has said it will follow the government’s rules on vaccination status.

A Djokovic performance at these tournaments would definitely attract those who want to see big players in action, said Dillon McNamara, who runs a tennis academy in Las Vegas.

“I’m not a Novak Djokovic fan at all … but I really would have liked to have seen him play,” he said, arguing that the Australian Open could have taken steps to keep the tournament safe in addition to excluding the unvaccinated.

Maybe there is only one thing everyone can agree on. As Murray put it: “The situation has not been good for anyone.”