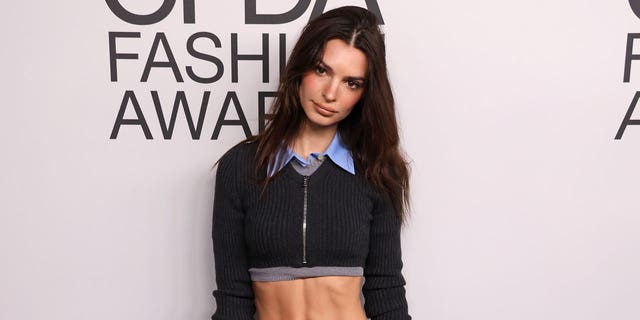 Emily Ratajkowski admitted that she “barely posted” photos from the CFDA Fashion Awards because she knew her abdominal muscles would “excite” controversy.

Ratajkowski, 30, finally shared photos from the event, which took place earlier this month on November 10, to her Instagram in a post on Wednesday.

The model wore an outfit designed by the brand Miu Miu. Ratajkowski paired a cropped sweater in layers over a shirt with a collar with a long navy blue skirt.

“Almost did not post this BC, I knew the controversy it would arouse, but hey, it’s my body and I’m not going to lean into the quarrel!” she subtitles the two photos from the event.

She ended her caption with, “God bless!”

Ratajkowski’s post follows the release of her first book, “My Body.” The book, which is a group of personal essays written by the model, explores Ratajkowski’s evolving understanding of the commodification of the female body.

“No matter what influence and status I have gained, I was only given because I appealed to men,” Ratajkowski wrote in the introduction to his book. “My position brought me close to wealth and power and brought me some autonomy, but it has not resulted in genuine empowerment.

“It’s something I have only achieved now, after writing these essays and giving voice to what I have thought and experienced.”

The model admitted that she hardly shared the discouraging images because she knew they would “excite” controversy.
(Photo by Raymond Hall / GC Images via Getty Images)

The model is no stranger to sharing pictures of her body online. She regularly posts in swimsuits to promote her swimwear line, Inamorata, and also posed nude while pregnant with her first child.

Ratajkowski was pregnant at the time of the 20th week.