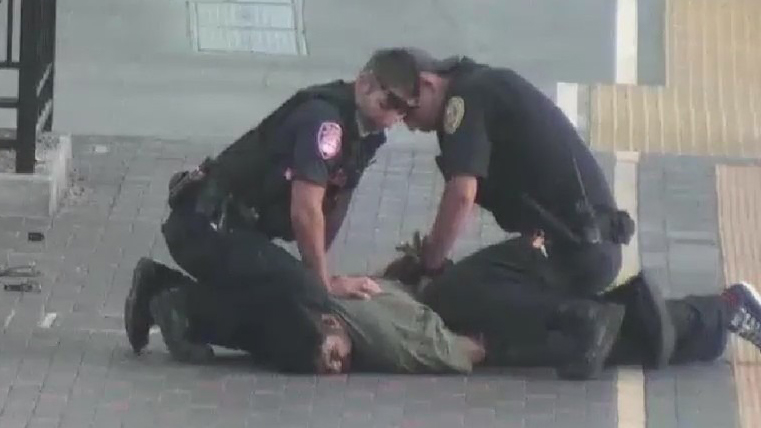 SAN DIEGO (CNS) – The family of a man who died after being remanded in custody near downtown Santa Fe Depot has filed an unlawful death case against two San Diego police officers who were present during his detention.

Angel Zapata Hernandez, 24, died on October 15, 2019, after an MTS code compliance officer encountered him that day near the tracks north of the depot. The officer and a private security guard took Zapata Hernandez into custody and held him face down on the ground for several minutes.

Lawyers representing the family claim that Zapata Hernandez was held down in an unsafe manner, which included the MTS officer laying his knee to Zapata Hernandez’s neck for nearly six minutes while handcuffed.

While the San Diego Metropolitan Transit System announced in April that a $ 5.5 million settlement had been reached with Zapata Hernandez’s family, the lawsuit, filed Thursday in federal court in San Diego, claims that San Diego police officer Jordan Belchamber and Christino Quinonez, who arrived at the scene later, should have prevented the detained officers from detaining Zapata Hernandez that way.

The lawsuit alleges that Quinonez ordered officers to “stay on” Zapata Hernandez “despite his acknowledgment of Angel’s lying position, his lack of movement and his non-resistance.”

The complaint also states that Belchamber was previously trained as an emergency medical technician and thus “had a clear understanding of the need for immediate action in this dangerous situation.”

After Zapata Hernandez stopped breathing, the trial claims that Belchamber and Quinonez allowed him to be rolled on his back, but CPR was not administered in a timely manner.

The San Diego County Medical Examiner’s Office listed the form of death as homicide, stating that the cause of death was sudden cardiac arrest – pulmonary embolism, while it tended to persist.

“Angel died on the spot as a result of the continuing pressure on his back and the delay in resuscitation,” according to the complaint.

Photos: USS Germantown returns to San Diego after a decade of deployment in Japan

Both officers who held Zapata Hernandez back have since resigned. No criminal charges were filed in connection with the death.

In addition to the monetary settlement with Zapata Hernandez’s family, MTS announced in April that it agreed to make changes to its security policies and training. Sharon Cooney, MTS CEO, said at the time that the deaths could have been prevented by better training in psychiatric emergency and de-escalation, both of which are now in place in the agency’s revised policies.