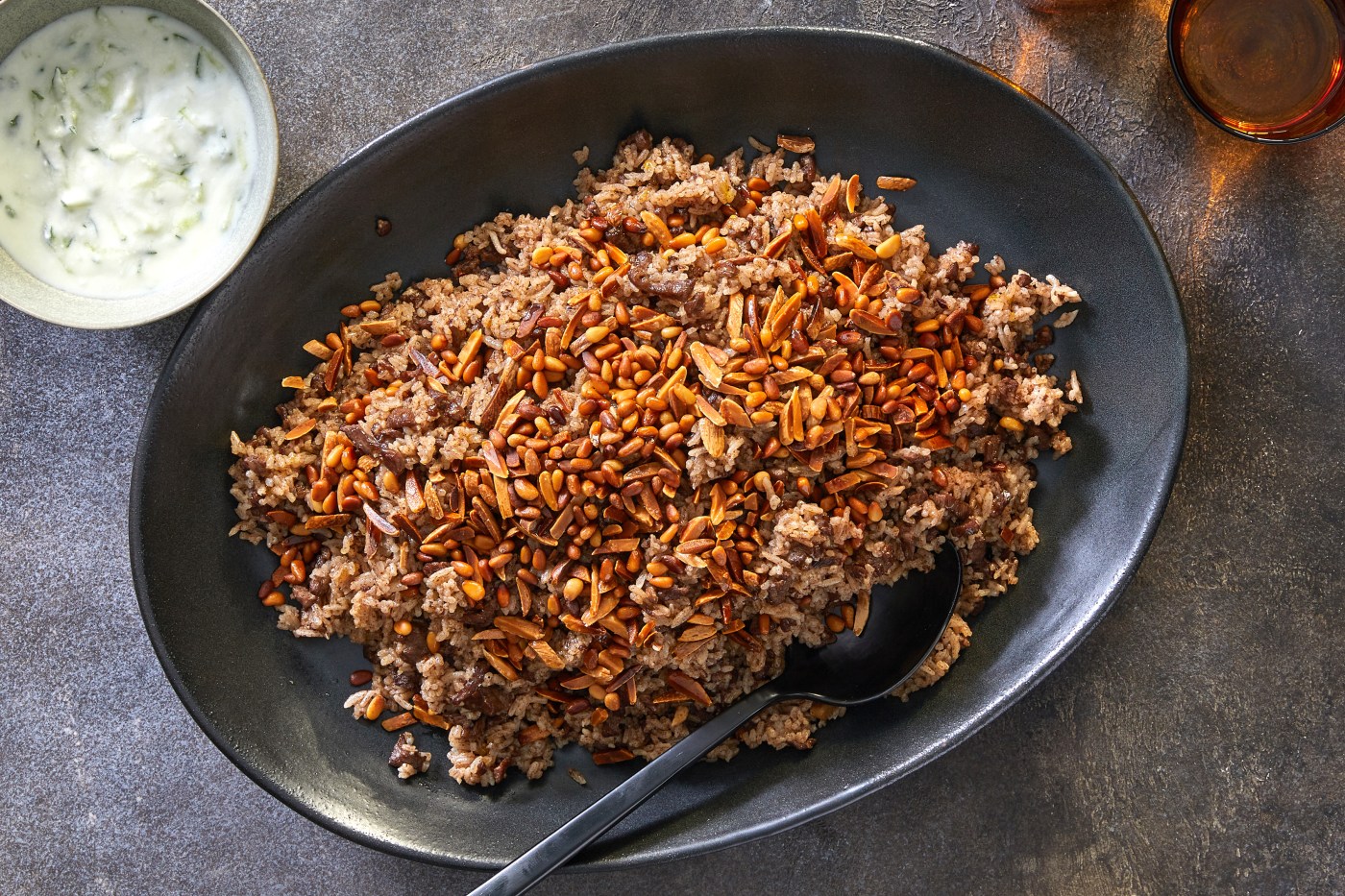 Rasha AlMahroos thinks of her Thanksgiving table and chuckles: A large turkey is sitting in the middle, and right next to it, as if hiding under its wings, a very small chicken.

“My mother-in-law can’t get used to turkey, so she always fills a little chicken with hashweh,” said AlMahroos, a lawyer who was born in Bahrain and now lives in the Washington, DC area.

Rarely is the Arabic Thanksgiving table in America that does not include some version of hashweh, which means “filling” in Arabic.

In the Arab world, the rice-based dish is used to stuff a whole lamb or chicken – meat that is often the center of festive meals. For more casual occasions, hashweh is also served to itself, generously topped with fried nuts. The fragrant rice, flavored with hot spices such as cinnamon, nutmeg and allspice, is combined with tender meat and crispy nuts for a dish with comforting contrasts.

Fadi Khayyat, a Palestinian American who immigrated to the United States from the West Bank city of Ramallah as an 8-year-old in 2003, remembers the first Thanksgiving his family celebrated. “My mom thought she could stuff turkey like we make chicken,” said Khayyat, who lives in New York City. “Then she heard it’s not safe due to temperature issues, so now she’s just making hashve next to it.”

Over the years, Khayyat’s family has begun to include more American dishes, but “hashweh is always the real star,” he said. Eating a large piece of meat without rice is confusing to him.

“The turkey should always be next to hashweh topped with pine nuts and yogurt,” he said. “If someone ends up with dry turkey, just serve it with hashweh and yogurt, then no one will complain about it.”

Similarly, AlMahroos, 39, can not fathom having a zoom – a party or gathering of people over food – without rice. AlMahroos’ hashweh rice is based in her home country, Bahrain, and is flavored with cinnamon, cumin and turmeric and has raisins along with the nuts. “A large piece of meat must come with rice to be presentable to the guests,” she said.

Hospitality is the foundation of Arab culture, most often manifested through food. Rice-based dishes happen to be the ones that are most sufficient to feed a large crowd, making them the perfect choice for an Arabic Thanksgiving table. Just as Arabs mix these traditions with American, local and seasonal ingredients are also on their way to classic Arabic hashweh.

Omaya Atassi, 35, a Syrian-American food writer and photographer in Dubai who grew up in the suburbs of Chicago, makes hashweh or riz mtabal (spicy rice), as Syrians sometimes refer to it, year-round. For Thanksgiving, though, her hashweh gets a facelift: “We use chestnuts instead of the fried nuts because of the holiday season,” she said. “Their sweetness stands in perfect contrast to the hot spices of hashweh.”

For Marguerite Lian-Hajjar, hashweh is a symbol of continuity and connection to the past. A third-generation descendant of Syrian and Lebanese immigrants, Lian-Hajjar, 60, still makes hashveh, as her “sitti” or grandmother did, from her 2 x 4-foot kitchen in Brooklyn.

“Hashweh is a symbol of our mothers and their mothers before them,” she said. “There are fewer and fewer ties to our past. Food is the strongest that keeps us connected.”

Hashweh means stuffing in Arabic, hence the name of this dish used to stuff chicken, lamb, pigeon and almost any other poultry or meat that can be stuffed. The combination of hot spices, airy rice and tender meat with the crispy, fried nuts is so delicious that it has become a meal in itself. For a more detailed presentation, you can top it with shredded chicken or lamb. Whichever way you serve it, you are out for a real treat, with a recipe that is so simple that it can easily find its way into your weekly dinner rotation. Hashweh goes perfectly with a salad of finely chopped cucumbers, tomatoes and onions garnished with lemon, olive oil, salt and a little dried mint.

1. Make the rice: Mix allspice, cinnamon, black pepper and nutmeg together and set aside. Rinse rice in a colander until the water is almost clear, then soak them in cold water for 15 minutes. Drain and let stand for 15 minutes.

2. While the rice is softening and draining, heat the butter and olive oil in a large Dutch oven or nonstick pan over medium-high. When the butter starts to boil, add half of the spice mixture and fry for a few seconds until it smells. Add meat and cook, breaking the meat finely with a wooden spoon until any released water evaporates and the meat is nicely browned, 10 to 15 minutes. (It is important that the meat is in small equal pieces.)

3. Add drained rice to the pan along with the remaining spices, and stir to combine and cover with the oil. Pour in the broth and bring to a boil. Flavor for spices: the foundation should be more salty than you would like your finished dish to be, so add more salt to your liking, but do it generously.

4. When the mixture boils, lower the heat to maintain a simmer, cover the pan and cook until the liquid has mostly evaporated, but the rice is still easy to stir with a spoon and does not stick to the bottom, 8 to 12 minutes. Give the rice one last mixture, turn off the heat, then wrap a clean tea towel or paper towel around the lid and cover again. (The towel will absorb excess moisture.) Let stand and steam in the residual heat for 20 minutes.

5. While the rice is cooking, prepare the topping: Place a small frying pan over medium-high and pour in enough oil to cover the bottom thinly (1 to 2 tbsp). Add pine nuts and stir around so that it covers evenly with the oil. Reduce heat to low heat and continue stirring until nuts have a light golden color, about 4 minutes. Remove from the heat and drain the nuts on a plate lined with paper towels. Repeat with chopped almonds.

6. While the rice is resting, make the yoghurt: Grate the cucumber roughly and place it in a colander in the sink. Sprinkle with salt, mix and set aside for 10 minutes so the juice can drip off. Give the cucumbers one last mixture and press them with the back of a spoon to ensure that excess liquid runs out. Transfer to a bowl and add yogurt, garlic and lemon juice and season with salt. Whisk until well blended, season to taste and add more salt if desired.

7. Fluff rice with a large fork, transfer to a serving platter and top with roasted nuts. Serve, toss the yogurt around so each person can put a blob over their rice.

Tip: Hashweh is perfectly delicious with either ground beef, lamb or a combination. But if you have time, the texture of hand-cut meat is preferable. Any cut of meat pigeons as it will be minced very finely: beef flank, breast, tenderloin, even stew cuts as well as lamb chops. Chop it small – no bigger than a dry chickpea. The easiest way to do this is to freeze your meat until it is almost completely frozen, but can still be cut into slices with a knife, then you can easily cut through it as you would a root vegetable.

Subscribe to our weekly newsletter, In The Know, to have entertainment news sent straight to your inbox.