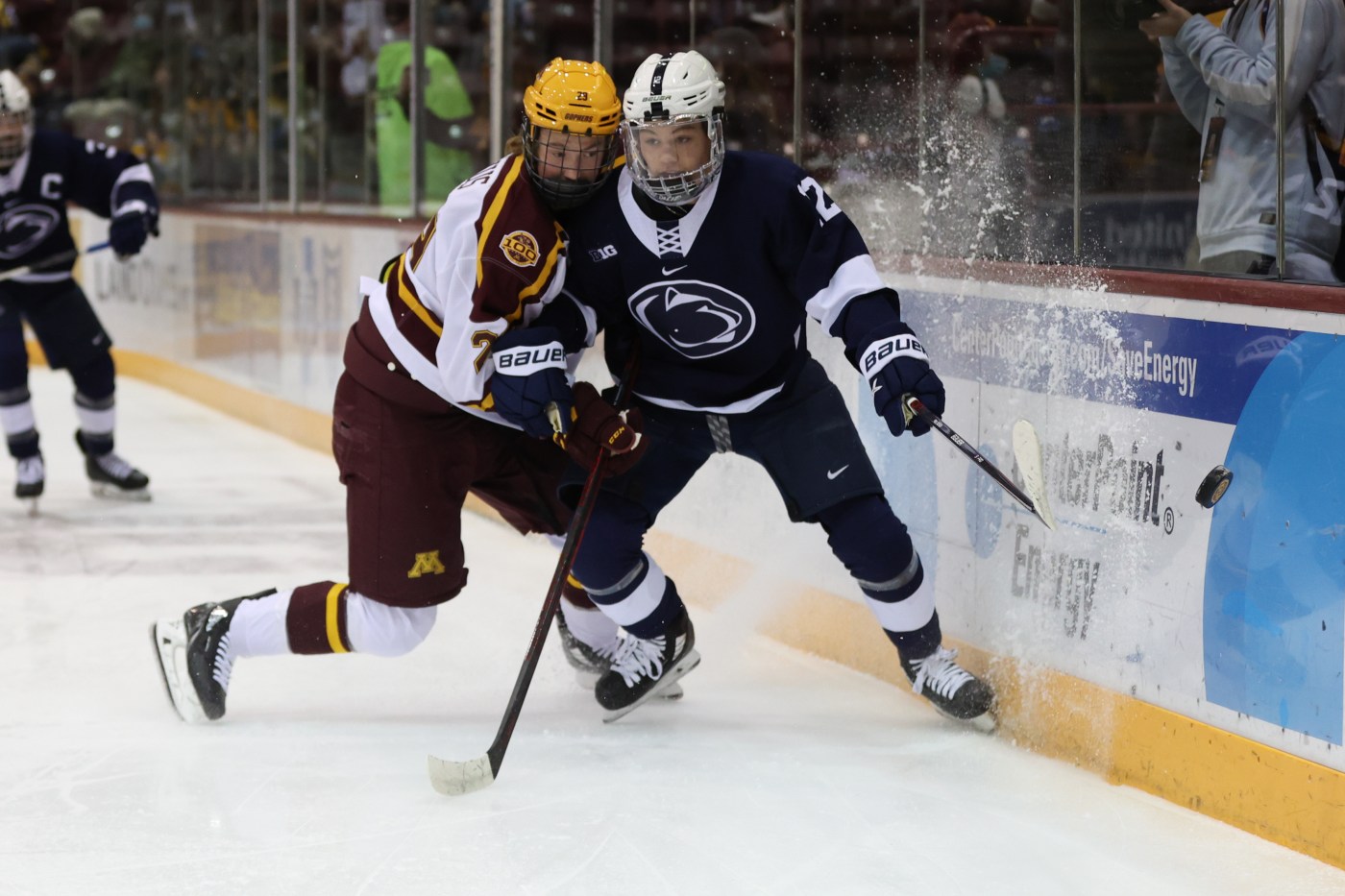 When things go wrong on the hockey field, fans want easy explanations. They will blame the goalkeeper, or the defense or the special teams. Or whatever. But hockey is rarely that simple.

For the Minnesota Gophers, who suffered their third defeat in a row Friday night as they fell to Penn State 5-3 in the opening of their Big Ten series, it was a bit of everything that contributed to the problems.

A couple of 58-second goals in the third period made the biggest difference on Friday as the Lions rallied for their first win in November, keeping the Gophers on the hunt for answers to their matches in the league openings. Minnesota now has six losses, and five of them have come in the first game of a two-game series.

“It was a disappointing loss. We delivered the match and we’ve seen it now three Fridays in a row,” said Gopher’s coach Bob Motzko. “We do it (in) a little different ways. Simple backchecks, missed the net … There was enough lack of detail in our game for that to happen. ”

Jaxon Nelson’s first two-goal game went to nothing in the loss as Gophers fell to 7-6-0 overall and 4-3-0 in the Big Ten. They got one goal and two assists from red-hot rookie Matthew Knies and 21 saves from goalkeeper Jack LaFontaine in the loss.

“You have to give our team a lot of credit to make it against a great Minnesota team,” said Penn State coach Guy Gadowsky, who is now 13-4-1 in his last 18 meetings with Gophers. “Every time you can win here at Mariucci, you have to be very happy.”

LaFontaine were solid in the opening season as the Lions showed their signature propensity to shoot from anywhere and everywhere. But a couple of powerplay goals – both long-range shots through the traffic of Penn State Center Connor MacEachern – were ultimately Gophers’ downfall. Motzko said he has generally been happy with the team’s offensive and special teams after Gophers scored twice in power play on Friday, but the defense needs to be better.

“We need to have defenders who stand in the way of puck on the penalty kill, instead of being away just a little bit,” he said after the Lions scored on both of their man-advantage opportunities. “There are parts of hockey that you have to have details and structure in your game, and we have that offensively. But when it comes to the other side of it, right now we are below average. ”

After scoring first in their previous six games, for the first time in almost a month, Gophers found himself behind early on when the Lions made the first mark on the scoreboard. But Gophers drew even before the first ended when Knies scored his sixth goal of the season.

An early powerplay in the second period clicked, with Nelson scoring a rebound from a Knies drive to the net for Gophers’ first lead of the match. But the Lions got the next two, including a game that seemed cruel and unusual punishment.

With Gophers on a powerplay, they got several good scoring chances on Penn State goalkeeper Oskar Autio. Just as the penalty expired, Sammy Walker shot past the net and the puck slid around the boards and out of the zone. It went straight to Lions striker Ben Copeland coming out of the penalty box, he was able to grab the puck and score on an outburst for a 3-2 lead. It was another example of missing the net, which has been a problem for Gopher’s many evenings this season.

Nelson restored the fight late in the second, only to see the Lions take control in the final 20 minutes, scoring the quick goals and killing more than 30 seconds of 5-on-3 powerplay to hold the two-goal lead.

A bright spot for Gophers was the return of newly trained striker Chaz Lucius, who had missed the previous six games due to injury.

“Having a beginner who can go up and play an important role is obviously good for us,” Nelson said. “We just have to get out and play the right way.”

Autio finished with 32 saves for the Lions, who got a losing streak of four games.