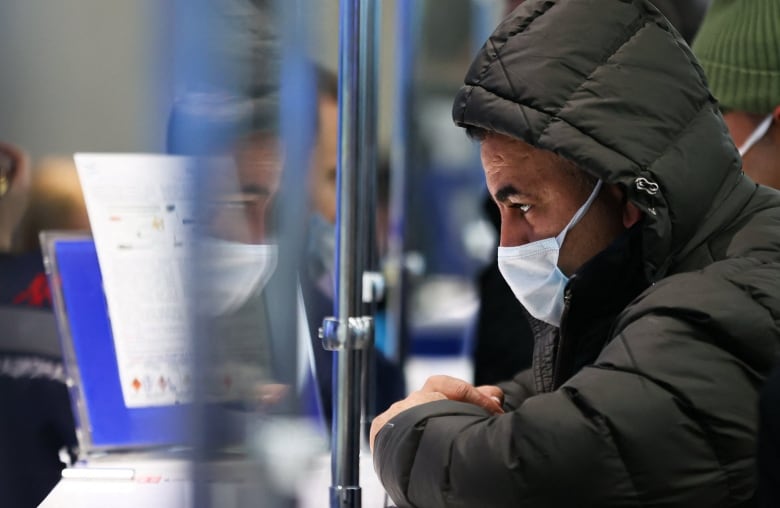 Hundreds of Iraqis flew home from Belarus on Thursday, giving up hope of reaching the EU after more than a week of tensions at the bloc’s eastern border, where thousands of migrants were stranded.

Many others moved into a heated warehouse to escape the bitter cold and emptied a camp near the border with Poland, Belarusian state-run media reported. But the Polish Ministry of Defense released a video showing a few hundred people and a few dozen tents left at an official crossing where clashes broke out recently.

It was not clear whether the two countries were talking about two different places on their common border, but it was typical of the dueling narratives that have marked the crisis, where both Belarus and Poland have tried to present themselves in a positive light, while they portray the other as numb and irresponsible.

Tensions have flared up in recent days, with about 2,000 people, mostly from the Middle East, trapped in a damp forest as forces from the two countries faced each other. About half of them were women and children, according to the United Nations High Commissioner for Refugees. At least 12 people have died in the area in recent weeks, including a one-year-old whose death a Polish humanitarian organization reported Thursday

Most flee conflict or hopelessness at home and aim to reach Germany or other Western European countries. But Poland did not want to let them in, and Belarus did not want them to return to the capital Minsk or otherwise settle in the country.

The West has accused Belarusian President Alexander Lukashenko of luring migrants to the border to use them as pieces to destabilize the 27-nation bloc in retaliation for its sanctions against his authoritarian regime. Belarus denies orchestrating the crisis, which has seen migrants enter the country since the summer and then try to cross into Poland, Lithuania and Latvia.

In the middle of the tug of war, a total of 430 Iraqis have signed up for flights home, the Iraqi consul in Russia, Majid al-Kilani, informs. And 374 boarded one that left Thursday afternoon, Lukashenko’s spokeswoman Natalya Eismont said.

Iraqi Kurdish migrants said the warehouse, where many of the migrants have been relocated and where they should have access to mattresses, water, hot meals and medical care, was filling up quickly, with not enough food or places to sleep.

A video acquired by The Associated Press showed men, women and children at the facility, some sleeping on blankets or sleeping bags on the floor.

“In the beginning the situation was good, I mean the first day we got three meals a day. But as more people came in from the forest, it has become more and more crowded. As a result, we got no dinner yesterday and no lunch. today, “said a young Iraqi Kurdish man.

“As you can see, it’s getting very crowded here, and it’s not easy to find a place to sit or sleep, but it’s much better than staying in the woods.”

The man, who spoke on condition of anonymity, feared reprisals, saying that everyone in the warehouse “has spent a lot of money getting here and they do not want to go back.”

As the situation at the border has spiraled over the past week, the war of words has also drawn into the allied Russia of the EU and Belarus.

In the latest salvo, EU Home Affairs Commissioner Ylva Johansson accused Belarus of participating in “a state-sponsored migrant smuggling” and said that sanctions and the halting of flights to Minsk transporting migrants were “our most effective tools in this fight”. . “

Foreign ministers from the G7 group of leading industrialized countries also condemned “the Belarusian regime’s orchestration of irregular migration across its borders” in a statement on Thursday.

Eismont, Lukashenko’s spokesman, said the fact that hundreds of people left Belarus shows that the government is holding up its share of the deal. The rest “categorically refuse to fly, but we will work on it,” she said.

Earlier this week, according to Eismont, Lukashenko suggested German Chancellor Angela Merkel allow the EU to open a “humanitarian corridor” to allow 2,000 migrants to go to Germany, while Belarusian authorities would work to convince the other 5,000 to return to their home countries.

German Interior Minister Horst Seehofer said in Warsaw that proposals that Germany would be ready to receive around 2,000 migrants were “false information”.

Following Merkel’s call with Lukashenko on Tuesday, her office stressed the need for humanitarian aid and for the safe return of migrants.

Poland has taken a hard line with the illegal entry of migrants, strengthened the border with riot police and troops and made plans to build a high steel barrier. The Polish approach has largely met with approval from other EU nations that want to stop a wave of migration.

But Poland has also been criticized by human rights groups and others for pushing migrants back to Belarus and not allowing them to apply for asylum.

In recent days, a melee battle broke out at the border, with migrants throwing stones at Polish forces gathered on their side of the barber wire fence and wounding 12, and the troops responded with water cannons and tear gas.

Mr Lukashenko has denied the allegations in a statement issued Friday stating “Similar, baseless allegations concerning Russia’s intelligence have been made more than once.

In May, however, he had spoken out against the EU sanctions imposed on his country for its harsh suppression of internal disagreement, saying: “We stopped migrants and drugs – now you want to catch them and eat them yourself.”

“Western countries are using the migration crisis on the Belarusian-Polish border as a new cause of tensions in the region close to us, for pressure on Minsk, while at the same time forgetting their own commitments on the humanitarian sphere.” he said.