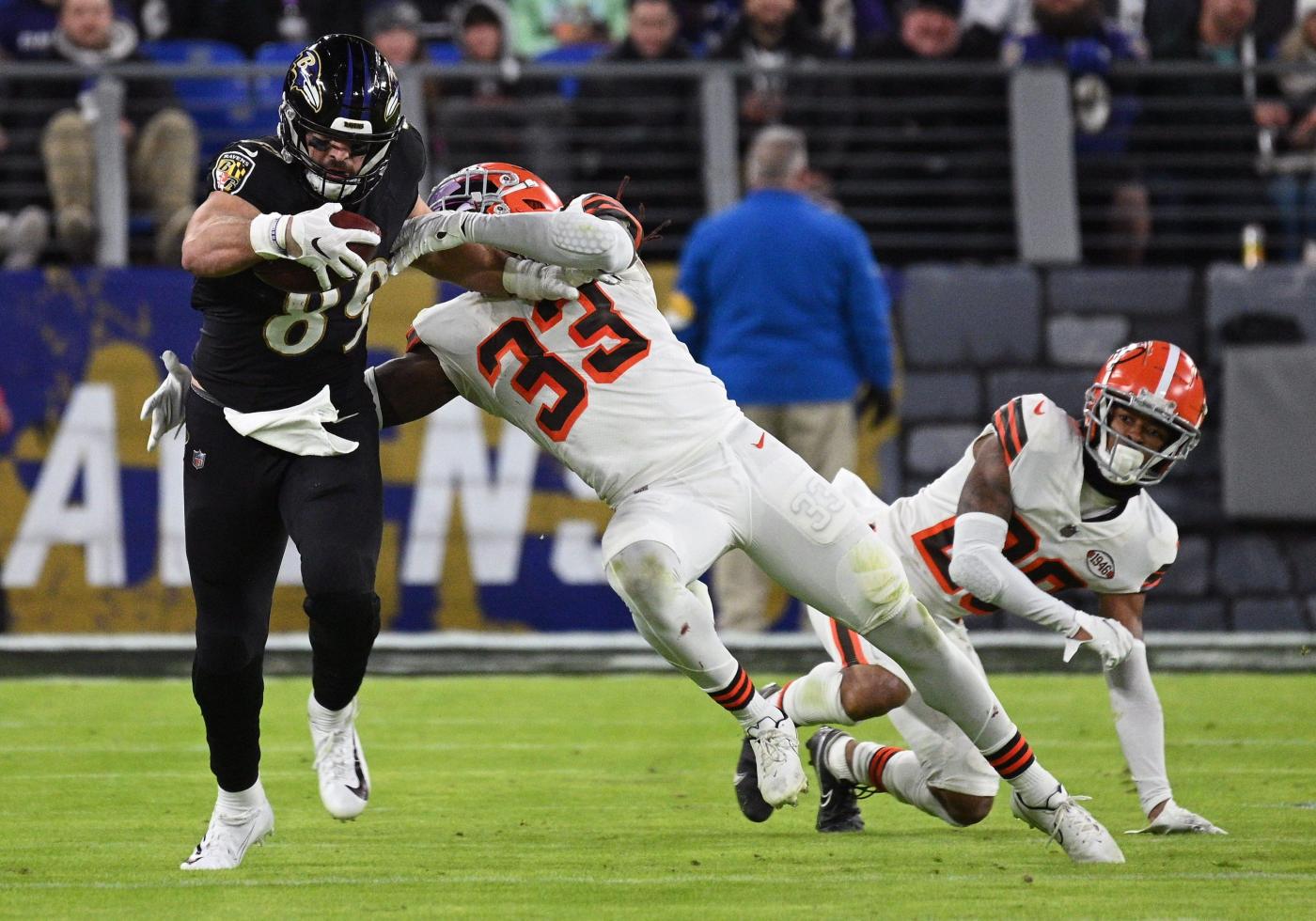 Here’s what the Baltimore Sun sports staff had to say immediately after the Ravens’ 16-10 victory over the Cleveland Browns Sunday night at M&T Bank Stadium:

Jonas Shaffer, reporter: As long as the Ravens (8-3) have a defense as good as Sunday’s iteration and a kicker as unassailable as Justin Tucker, they can stick with anyone. Lamar Jackson’s four interceptions can not be ruled out, especially given the offensive’s latest hard patch, but in the end, the Ravens just keep doing enough. Divisional matches are always knock-out, drag-’em-down matters. The Ravens were just the toughest team on Sunday. To hold the Bengals (7-4) in AFC North, they will need more of that.

Childs Walker, reporter: The Ravens did not look like the best team in the AFC, though that is what their record says they are at the moment. They made everything look difficult on the offensive, and it started with a terrible passing performance by their franchise player, Lamar Jackson. Together they have scored 42 points over their last three games. Right now, they are neither a grind-it-out treadmill nor a large air force. Give their understaffed defense played the ball to a heroic performance against Cleveland’s best league game. The Ravens played without their best inner lineman, Calais Campbell, but Justin Madubuike and Brandon Williams stood up to a massive challenge. Outside linebacker Tyus Bowser played like a star again. Justin Tucker was excellent, hitting from 49 and 52 yards on a night in which Cleveland’s kicker missed a crucial field goal. The Ravens found a way to get to 8-3 on an evening full of weird, ugly football, and that’s something to say in an NFL season defined by weird results.

Ryan McFadden, reporter: While the Ravens’ attack had perhaps its most sloppy performance of the season, the pass rush was fantastic. Linebackers Odafe Oweh and Patrick Queen were disruptive all evening, while cornerback Marlon Humphrey had a solid outing. Lamar Jackson had a ton of head-scratching throws, but once again he came through when it mattered most. It is not the most beautiful victory, but it is nonetheless an important divisional victory.

CJ Doon, editor: We saw the best and worst at Lamar Jackson Sunday night. A career-high four interceptions almost gave the game away, but the Ravens’ defense made sure that those mistakes did not prove to be too costly. Jackson did not have his best night pass as he finished 20-for-32 for just 165 yards, but he was able to play enough by buying time in his pocket and struggling for the first downs. This back-pedaling touchdown pass to tight-end Mark Andrews will be all over the highlights of the season. This offensive performance was one to forget, but the Ravens’ place at the top of AFC North and the entire 8-3 conference is all that matters.

Tim Schwartz, editor: A team had to win this match, and luckily for Ravens fans, the Browns’ offense scored 10 points despite four Lamar Jackson interceptions. Justin Tucker becomes the team’s MVP as he continues to make big kicks. The Ravens fought off the offense, but coordinator Greg Roman deserves praise for not giving up the running game late in the fourth quarter as Baltimore put together an 11-play, 45-yard drive that ate nearly six minutes clockwise. Linebackers Tyus Bowser, Patrick Queen and rookie Odafe Oweh carry this team defensively – just like we all expected to get into this season, right? Somehow the Ravens are 8-3 and a Super Bowl challenger, even though they are not passing the eye test right now.