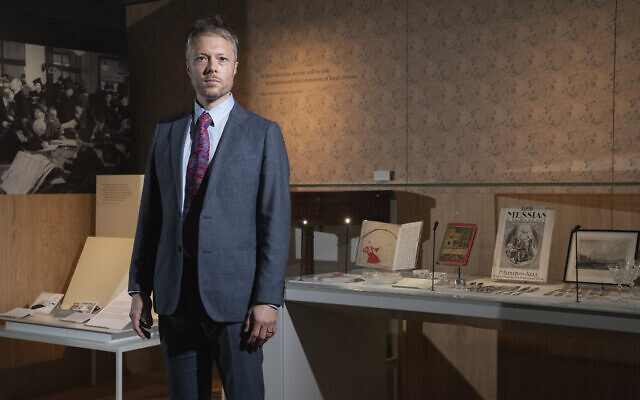 LONDON – There is a ritual that visitors often go through when entering an exhibition about the Holocaust. They are silent to a mournful silence. Their pace drops to a pilgrim’s shuffle. Their expression becomes a bit of awe as they see the unthinkable and begin to struggle with the evidence of human depravity.

These reactions are natural, conditioned by the design concepts that understandably have dominated museums and memorials dedicated to Europe’s murdered Jews: darkness, shadows, sepia.

The Imperial War Museum in London has tried something new. By bringing the story of the Holocaust into brightly lit spaces, it has sought to illuminate and reconsider elements of the Holocaust narrative that are sometimes “misunderstood.”

“The big problem with dark spaces and Holocaust museums,” says James Bulgin, the Holocaust researcher who curated the Holocaust gallery from conception to completion, “is that as soon as you enter a dark space, it feels like whether the narrative leads relentlessly in one direction, which was not the case. ”

“It suggests that the only appropriate answer is silence,” he says. “The subject is, of course, overwhelmingly tragic, but one wants people to feel empowered to ask questions and develop their understanding, and that happens through research.”

“You also tacitly suggest that these things happened in the shadows or in invisible dark spaces, and not in the world we all live in,” he adds. “It pushes it into a distant past.”

The museum opened to the public two new permanent galleries – one on the Holocaust, the other on World War II more generally – on October 20, after a year-long £ 30.7 million renovation project ($ 41.2 million) that replaced the existing Holocaust exhibition, which opened in 2000.

On November 10, the Duchess of Cambridge formally opened both, as well as a temporary photo exhibition looking at Holocaust survivors and their families, which will be open until early January.

Together, the new galleries occupy two floors and span 3,000 square meters (33,000 square feet). The Holocaust Gallery alone has about 2,000 photos, posters and artifacts, including some of the Velten concentration camp barracks – a sub-camp of Ravensbruck and Sachsenhausen – believed to be the last remaining part of the camp.

Bulgin arrived late for Holocaust studies. He cut his teeth in theater production on London’s West End, and his professional background is immediately noticeable in the use of space and design choices that make the gallery both groundbreaking and tactful.

“It’s about perceiving space and tone,” Bulgin says. “We will never know what these people experienced, but we can easily understand the environment in which it took place.”

As visitors meander through a series of interlocking spaces, large video screens radiate contemporary images and sounds from the places where millions were murdered.

“We use contemporary recordings of environments as they are today, not to try to recreate them, but to say, forests and birdsong – these are complex sensory sensations through which we experience reality,” explains Bulgin. “The small moment of connection between the two is important.”

The design choices at the Imperial War Museum can be bold and imperceptible at the same time.

Images tend to be placed at eye level, so “people look you in the eye throughout the gallery,” Bulgin says. Sepia, “which speaks of the passage of time and rather the authenticity of the image as it existed,” has been banished, he says.

Objects are placed where they would be in the real world, and books are placed as if they were handed over to you. “There’s a logic here,” Bulgin says.

These small choices are part of the exhibition’s central goal: to reflect recent advances in Holocaust research and to correct misunderstandings in how the Holocaust is remembered in Britain.

“I was concerned that the Holocaust was misunderstood and framed in ways that were not always very historically accurate, but that also did not treat the Jewish individuals and communities in the narrative appropriately,” Bulgin says.

“Every major Holocaust museum has framed this whole story as one about industrialized genocide – that it was based around Auschwitz and nowhere else. To me, the idea that it is this mechanized process is really misleading,” he says. in many ways it is very dirty and basic. Brutal, bloody and barbaric. “

The ghettos and massacres of Eastern Europe’s “Holocaust by Bullets” are at the heart of the Imperial War Museum’s narrative, along with the more commonly known and horrific images of the death camps.

Bulgin has also sought to introduce a more serious understanding of the perpetrators of the Holocaust and their motives in the public consciousness. Bulgin was concerned that “many of our visitors had a conditional image of the perpetrator, which was largely defined by people like Amon Göth in ‘Schindler’s List’.”

“What’s far more frightening,” he says, “is that it was relatively normal people who did it, and somehow because of the nervousness about humanizing the perpetrators, they have been pushed to the edge of the narrative. “

Negotiating how to present their atrocities has been carefully considered. Images have been saved in their original size. Black borders indicate when they were taken by Nazi photographers.

British newspaper records and the level of contemporary knowledge about the Holocaust in Britain are also introduced as a means of pushing back against a perception that the extent of the Holocaust was not fully understood until 1945.

Britain’s Jewish establishment has given the exhibition almost universal praise.

There was a concern that the Holocaust narrative, housed in a British military museum, would quickly move towards the terrible climax of history.

But as visitors enter, they are presented with hundreds of flickering images and an introduction to Jews in pre-war Europe. Dutch Jews are seen giggling on a beach in the North Sea. Greek Jews stand and get bored outside a synagogue. Romanian Jews enjoying coffee at a café in Bucharest. Introducing British visitors to the full spectrum and geographical breadth of Jewish life in pre-war Europe plays an important role in the exhibition, which also includes a section on the Holocaust in Hungary.

“Where we start talking in Holocaust education is Jewish life before the war and the understanding of who the Jews in Europe were before the Holocaust,” Fuller says. “That is what they have done with this exhibition. They have humanized and focused on the people who are the victims as human beings first, instead of seeing them solely through a spectrum of their victim.

“It’s the kind of place you go and visit, knowing you’ll come back many times, because to be fair, it takes a lot of visits,” Bentley says.

“It’s hugely worth it. The quality is incredibly high – the number of artifacts and objects to be seen, the way it is displayed, the amount of light versus the opposite, which is more usual,” he says.

Despite praise, some in the Jewish community feel that the Imperial War Museum’s approach may have been too limited.

Ivor Perl, a Hungarian Holocaust survivor who survived Auschwitz, Dachau’s sub-camps and a death march before being liberated in April 1945, says that although “they have done it very tastefully and tactfully”, “the horror of the whole story was so enormous, covering it with one canvas is very difficult. “

Perl, who is included in the recorded testimonies at the end of the exhibition, adds that “the horror was so enormous that one could never properly do that justice.”

Perl, who is active in Holocaust education in the UK, is concerned that efforts to tell the broader narrative have been at the expense of the true horror of the Holocaust. He survived the Holocaust with his brother, but they lost their parents and seven brothers and sisters.

“Will it be enough to pass on the information to future generations? It remains to be seen. I personally feel that a few more things about the gas chambers or the camps themselves could have improved it,” he says.

“It’s a nice and hygienic little thing. It’s neat and tidy. You can go and have a cup of coffee and tea afterwards, ”he says. “But it’s so hard. The huge thing – when can you say you’ve done enough and included everything and anything?”