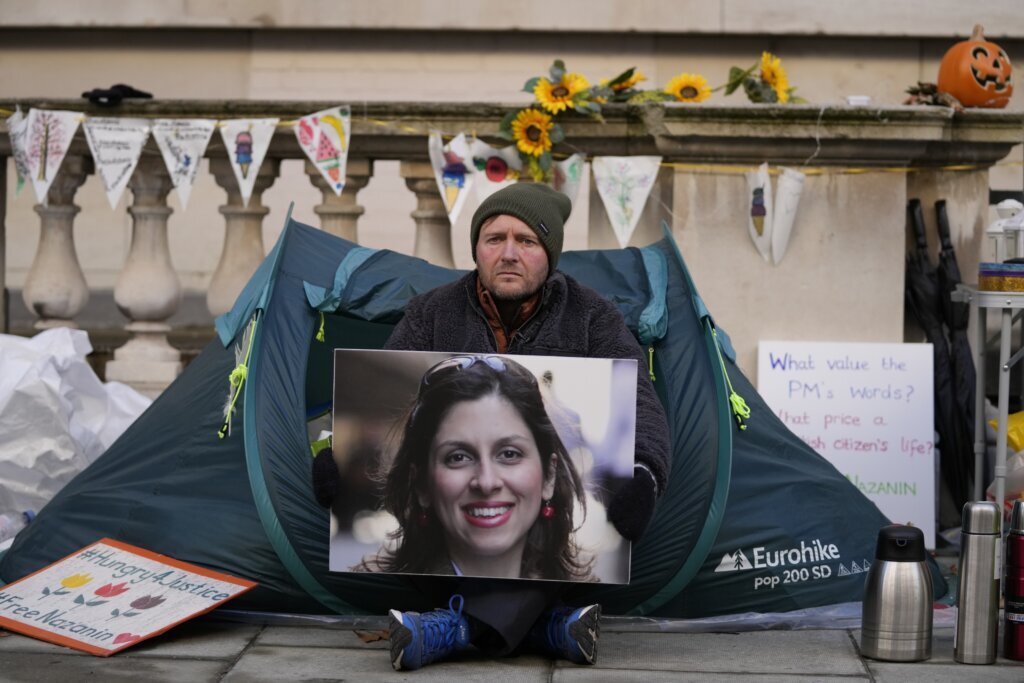 LONDON (AP) – The husband of a British-Iranian woman who has been detained in Iran for more than five years said on Saturday that he would end his hunger strike outside Britain’s Foreign Office after 21 days.

Richard Ratcliffe has been sleeping in a tent outside the Foreign Office’s main entrance in an attempt to pressure the British government to secure the release of his wife and other detained British-Iranian nationals. He began his demonstration last month after his wife, Nazanin Zaghari-Ratcliffe, lost his latest appeal in Iran.

“We were probably hoping we’d have a breakthrough with this. We don’t have that yet,” Ratcliffe said.

Ratcliffe said he had started getting pain in his feet overnight, and a discussion with a doctor persuaded him to stop the hunger strike. He said he planned to go to the hospital to be checked and hopes to be able to eat something afterwards.

Zaghari-Ratcliffe served five years in prison after being remanded in custody at Tehran airport in April 2016 and convicted of plotting the overthrow of the Iranian government, an indictment she, her supporters and rights groups deny.

Zaghari-Ratcliffe was employed by the Thomson Reuters Foundation, the news agency’s charitable arm, and was arrested on her way home to the UK after visiting family. Rights groups accuse Iran of holding dual nationals as bargaining chips for money or influence in negotiations with the West, something Tehran denies.

In May, she was sentenced to another year in prison on charges of spreading “propaganda against the system” for taking part in a protest outside the Iranian embassy in London in 2009. An appeals court upheld the sentence last month, which includes a one-year travel ban , which means she would not be able to leave Iran until 2023.

Her husband seemed gloomy after meeting with British Foreign Secretary James Cleverly on Thursday in the wake of discussions he had with Iranian officials in London.

After describing his meeting with Cleverly as “depressing”, Ratcliffe said he was nearing the end of his hunger strike “as a strategy.”