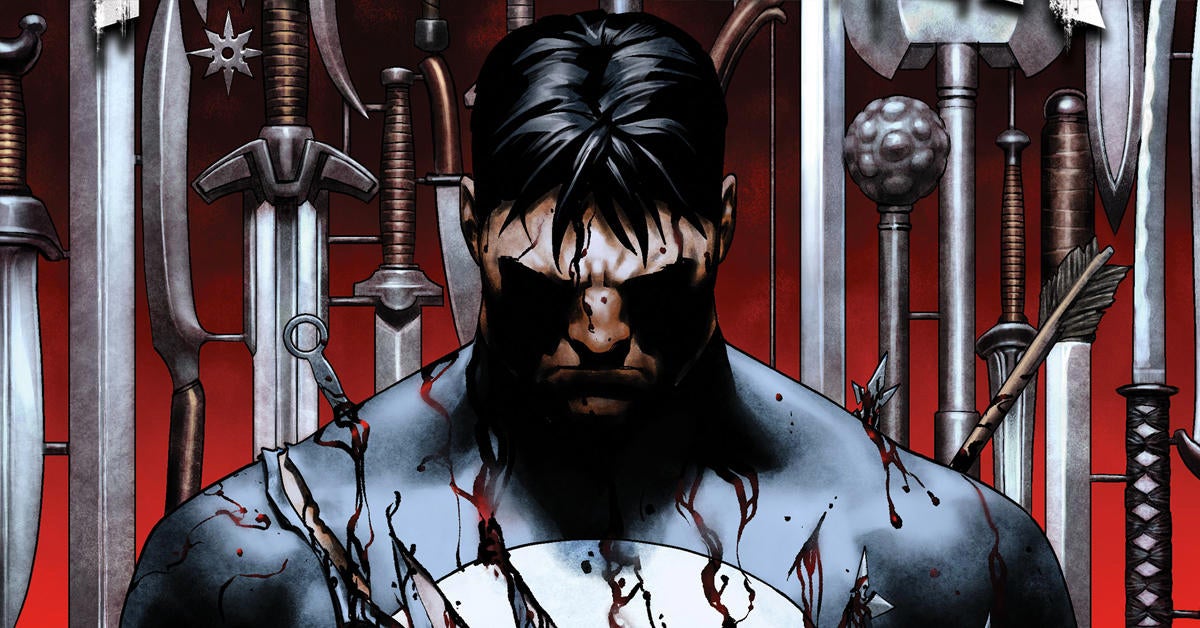 Marvel’s Punisher has revealed a preview of Frank Castle losing that iconic skull emblem. Frank Castle is leaving behind the chest symbol as he works with The Hand in his new title. Punisher # 1 written by Jason Aaron and drawn by Paul Azaceta and Jesus Saiz showcases the new look for the vigilante. As another small change, Frank Castle will be using swords and other close-range weapons instead of his host of guns in the new title. When the new direction was announced, a lot of social media decided to weigh-in on the decisions. But, Marvel is sticking to their creative team’s plan. You can check out the new logo down below.

Recently, Kevin Smith talked about the controversy on Fatman Beyond. His message basically boils down to ‘nothing is forever’ in comic books.

New Punisher logo looks like a fusion of Vision and Scarlet Witch as a skull pic.twitter.com/pYD31skWER

“This character has been insanely popular for decades. He’s recognizable by the skull on his chest,” Smith began. “Apparently, the skull on his chest became problematic because it’s been co-opted by some folks that Marvel does not want to be associated with. So, this seems like their fix. Also, maybe the character has come under fire in recent years for all the gun use and stuff. ”

“So, what they’ve done is changed the skull into a proprietary looking skull. That’s the other reason. Marvel / Disney cannot own, or trademark the image of a skull as seen on The Punisher,” he added. “‘Cause it’s too close to a regular skull. By adding the horns and stuff, that is their Punisher logo now. It removed them from the Punisher logo as it’s traveled in the world to places that they do not want to be associated with “Frank Castle no longer using machine guns or any sort of guns because he’s all swords now.”

“Naturally, some folks are all upset. I do not read the comics, so I got no skin in the game. But, as a long-term comic book reader, this is what I will say. If you wait long enough kids , everything comes back around, “the host explained. “This is not the first time that Frank Castle has been turned into a different version of The Punisher. They did this when we did Marvel Knights. They did Frank Castle got killed, went to Hell, came back as a guy who would only kill bad people and monsters. You know, supernatural characters and stuff like that. “

He “continued, It’s a character that sometimes, based on the culture, has butted up against the culture. So, Marvel has tried to find ways to still keep a beloved character viable while not being associated with whatever they do not want to be associated with. This is yet another example of that. So, if you’re like ‘Oh, I can not stand what they’re doing!’ Take it from an old comic book fan, just wait 10 minutes, nothing is forever kids.You think that skull is gone from The Punisher’s chest forever? No. And when they put it back on his chest, they will sell a bajillion copies. “

Will you be checking out the new Punisher title? Let us know down in the comments!