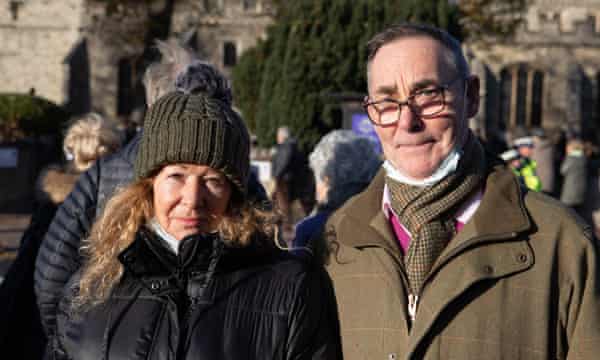 The streets of Southend were filled with members of the public who came to show their respect to a Member of Parliament who died to serve his constituents. Grieving at the funeral of Sir David Amess on Monday paid tribute to a man who always had time for a chat, loved a joke and was dedicated to the people he had been chosen to represent.

They thanked him with a round of applause as his coffin, draped in a union flag, was carried in and out of St Mary’s Parish Church in Prittlewell.

“It’s just tragic, it’s awful. Such a terrible waste of a life lived just to serve people,” said 64-year-old Antoinette Moore. “And he really did – he served everyone who met him. They are thin on the ground, like some people ‘.

She said she and her partner, 74-year-old John Lawrence, had traveled 45 minutes from their home to show their respect, after associating with Amess while living in his constituency.

Moore described her generosity and said he had taken children to the preparatory school she used to run on a guided tour of the Houses of Parliament. “Because of his personality, you felt like you had lost someone in your family,” Lawrence said of Amess’ death. “He’s one in a million.”

Amess was killed last month during a constituency meeting. There will be another service for him at Westminster Cathedral on Tuesday.

His relatives issued a statement in which they asked people to “put hatred aside and work towards unity”. They said, “Regardless of one’s race, religious or political beliefs, be tolerant and try to understand. As a family, we try to understand why this terrible thing happened. No one should die that way. No one.

“Please let something good come out of this tragedy. We are completely crushed, but we will survive and continue for the sake of a wonderful and inspiring man.”

In a tribute, MP Mark Francois said Amess embodied the forces of parliament. “Our voters are hiring us to represent them in a contract that can be renewed every few years. We work for them and not the other way around, and no one has ever been more aware of that than David Amess,” he said mournfully.

“No matter what one thinks of members of parliament – and opinions vary – in my experience, MPs from all parties are really trying to help other people. But collectively in recent years we may not always have helped ourselves, and I humbly suggest today that we should learn from that. But, boy, did David Amess keep the contract with his employers – and in his own incomparable style. Regardless of Parliament’s weaknesses, David Amess was the living embodiment of all its strengths. “

As he stood outside while the service continued in the church, 66-year-old Pat Shawyer agreed. “It’s very, very sad. Sir David was a wonderful Member of Parliament, he cared about our community and was involved in so many things,” she said. “I met him on several occasions and he was lovely, a real man. He would help you if he ever could, and his death is terrible for this community. “

Graham Ross, 70, of Southend, said: “Coming here today was just something I felt I had to do. He was just a nice man. He loved Southend. I know he was Basildon first, but he put Southend in his heart. He loved football in Roots Hall; he supported so many causes and always helped people. You never had a quick word with him, it was always 10 minutes because he wanted to know something about you. He was also always quick with a joke. “

One of the reasons closest to Amess’ heart was a campaign for a permanent memorial to singer Dame Vera Lynn, which he described as “one of the most beloved stars this country has produced”. Her song We’ll Meet Again was played as his body was carried out after the service.