A pro-lockdown researcher today urged Britain to ‘do more’ to prevent flu as a consensus begins to emerge that the worst of Covid is over.

Parallels between coronavirus and influenza are now being drawn, with Omicron causing around the same number of deaths as a bad flu season.

Education Minister Nadhim Zahawi revealed that ministers plan to loosen social restrictions even more by the end of this month amid the ‘promising’ statistics.

There are currently 200 daily Covid deaths in the UK on average as the fourth wave-top, compared to 400 from the flu in a bad year.

But Dr. Kit Yates, a member of the Independent Sage Press Group, suggested that these rates were not low enough and called for more action to tackle the flu.

Dr. Yates of the University of Bath tweeted: “Even if the figure of 200-300 daily flu deaths was correct, it does not follow that we need to do less to prevent Covid deaths.”

“Maybe it’s time we started talking about doing more to prevent the flu.”

Independent Sage has consistently pushed for an Australian-style Covid elimination strategy and most recently demanded a Christmas lockdown.

The group consists of 12 scientists, including a former chief scientific adviser to the government, a member of the Communist Party and some of No10’s own advisers. 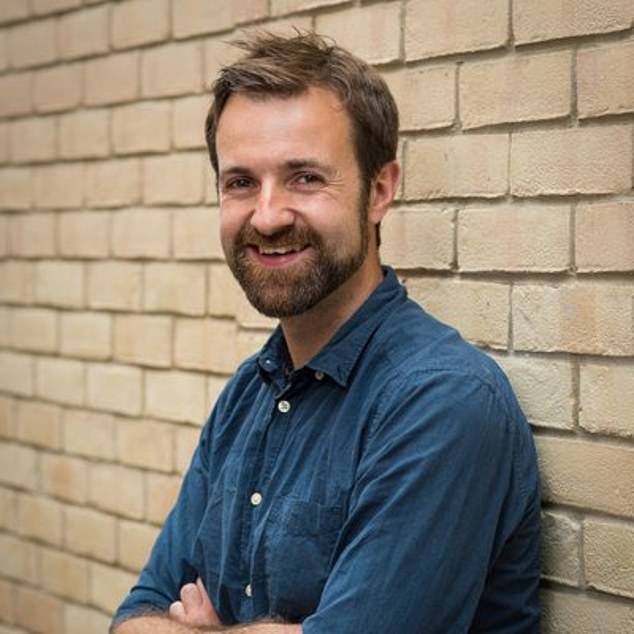 Dr. Kit Yates, a member of the Independent Sage Press Group, today called on Britain to ‘do more’ to prevent flu 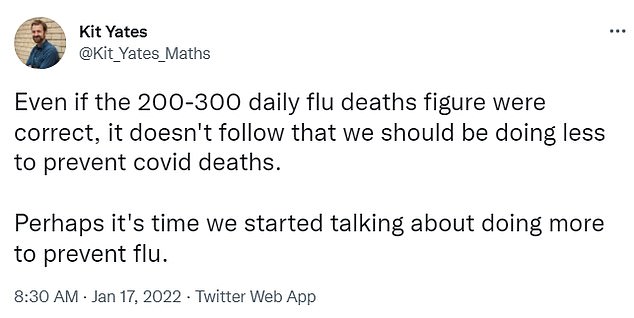 There are currently 200 daily Covid deaths in the UK on average as the fourth wave peak, compared to 400 from the flu in a bad year (pictured, Dr. Yates’ tweet) 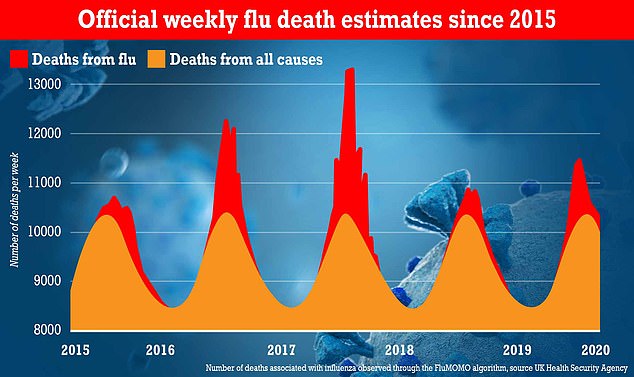 To calculate influenza deaths, the UK Health Security Agency – formerly Public Health England – assesses them using a statistical model that looks at the incidence of influenza and excess winter deaths. The total number of killed was estimated to be around 15,000 in 2016/17, with around 300 people dying every day at the top. In 2017/18, during the Aussie flu outbreak, a total of 22,000 people were killed by influenza, of which more than 400 died a day from the worst of the epidemic. But in 2018/19, only 4,000 were estimated to have died from the virus, with only tens of thousands of people dying a day at the top

Mens Dr. Yates did not present any specific measures against influenza, he later said there were ‘things we can do to prevent the transfer of Covid that do not look like a lockdown’. MailOnline has contacted Dr Yates for comment.

Dr. Yates’ comments come just a month after the Independent Sage lobbied for a 10-day switch lock and ‘limited’ mix at Christmas.

The group released an emergency statement on December 15, criticizing the government for wasting the ‘opportunity for early action’.

Among the group’s demands were that all indoor retail and hospitality establishments should be closed and a general ban on mixing across households in enclosed spaces.

The statement said: ‘The opportunity for early action has been lost and the time for further delay is over.

‘The situation is so urgent that we need to take urgent action now, and that means it is imperative to reduce contacts.

‘Counseling is no longer enough, as it does not show how urgent the situation is … 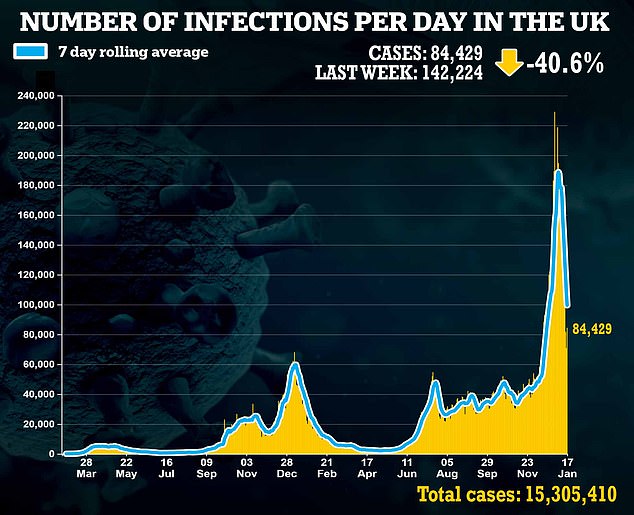 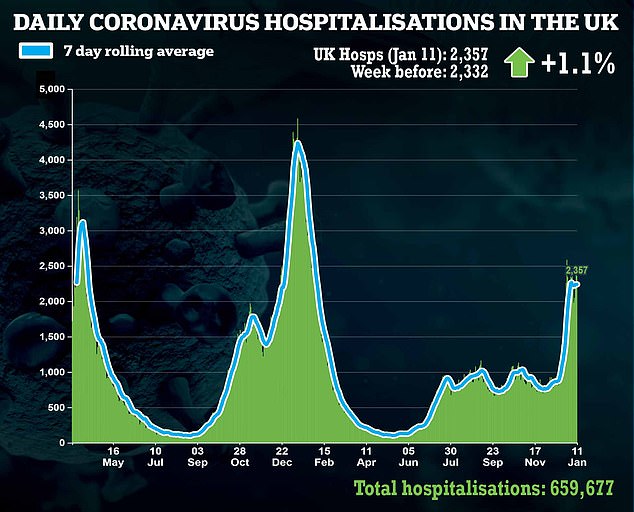 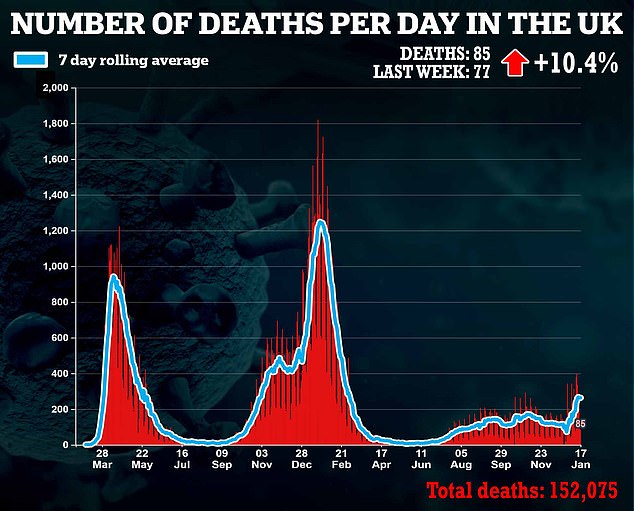 “We therefore now call for an immediate circuit breach to then allow for limited mixing from 25 to 28 December.”

While other British nations imposed tougher curbs, England stuck to its Plan B package of measures, including mandatory masks, Covid passports and work from home.

Covid outbreaks are now shrinking in 96% of England’s neighborhoods

Coronavirus cases are now falling in virtually every area of ​​England, official figures show, as the Omicron wave continues to collapse with deaths six times lower than in the second wave.

About 6,519 out of 6,790 neighborhoods (96 per cent) around the country recorded a drop in infections in the week to 11 January, according to the UK Health Security Agency (UKHSA).

Parts of Castle Point, Shropshire and Bexley have seen infections fall by more than 70 per cent week-on-week.

Deaths – which are the biggest lagging indicator of the trend in infections – are still rising slowly, but there is an average of only 212 a day now compared to 1,200 a day on top of the alpha wave in January, despite three times more infections this wave.

The weakened link between infections and less severe outcomes is due to protection against the vaccines, natural immunity, antiviral drugs and Omicron, which are thought to be inherently milder than older strains.

Zahawi today confirmed reports that Boris Johnson is seeking to loosen these curbs even more before the end of the month.

The government has relied on the collapsing Covid figures and the extended interruption between cases and serious illness.

A further 84,429 tests came back positive for the virus across the UK within the past 24 hours, according to data from the government dashboard, a drop of 41 per cent on last week.

Daily cases have dropped week-on-week for 12 consecutive days. There were also 85 coronavirus deaths recorded today, an increase of 10 percent compared to last Monday.

The latest hospital data show that there were 2,357 admissions on January 11, largely unchanged in one week.

Omicron appears to top with 260 daily deaths across the UK and around 200 in the UK.

One of No10’s pandemic models today said the relatively low Covid deaths were a sign that the UK could have a ‘flu-like’ relationship with Covid by the end of the year.

Dr. Mike Tildesley, who sits on an influential modeling subgroup of SAGE, warned that the country ‘was not there yet’ because hospitalization levels from the virus are still ‘relatively high’ – despite the fact that only a fraction of those seen in previous waves.

But he predicted that even milder variants than Omicron would emerge over the course of the year, which would strengthen Britain’s wall of immunity and create an even greater disruption between infection rates and hospitalizations and deaths.

Dr. Tildesley, a modeler at Warwick University, said the data suggested the pandemic was ‘turning’ after the Omicron wave, meaning ministers could start discussing what ‘living with’ Covid would be like.

By comparison, there were 1,200 a day at the top of Alpha last January, despite three times more infections this wave.