As the Omicron variant-fueled Covid surge appears to near its peak in many eastern states, the virus has begun to head west, striking elsewhere in the country. Oregon, Utah and Alaska now lead the nation in growth of Covid cases over the past two weeks, ending a long period of states along the east coast like New York, New Jersey, South Carolina and Vermont leading the nation.

Cases are also increasing in all 50 states, and have more than doubled over the past two weeks in 43 states. The nationwide daily case average reached a record 786,416 today and 1,822 deaths every day – the highest total since October.

Oregon leads the way, recording a 486 percent increase in cases over the past two weeks, up to 181 out of every 100,000 residents now testing positive for the virus daily.

In Utah, cases are up 468 percent over the last 14 days, with 279 of every 100,000 residents of the Beehive state recording infections daily.

The distance between Alaska and the rest of the nation, and the difference in climate, often leads to the state experiencing different trends than other parts of America. At the moment, though, it is following many others on the west coast, with cases up 443 percent over the past two weeks – with 197 of every 100,000 residents being infected daily. 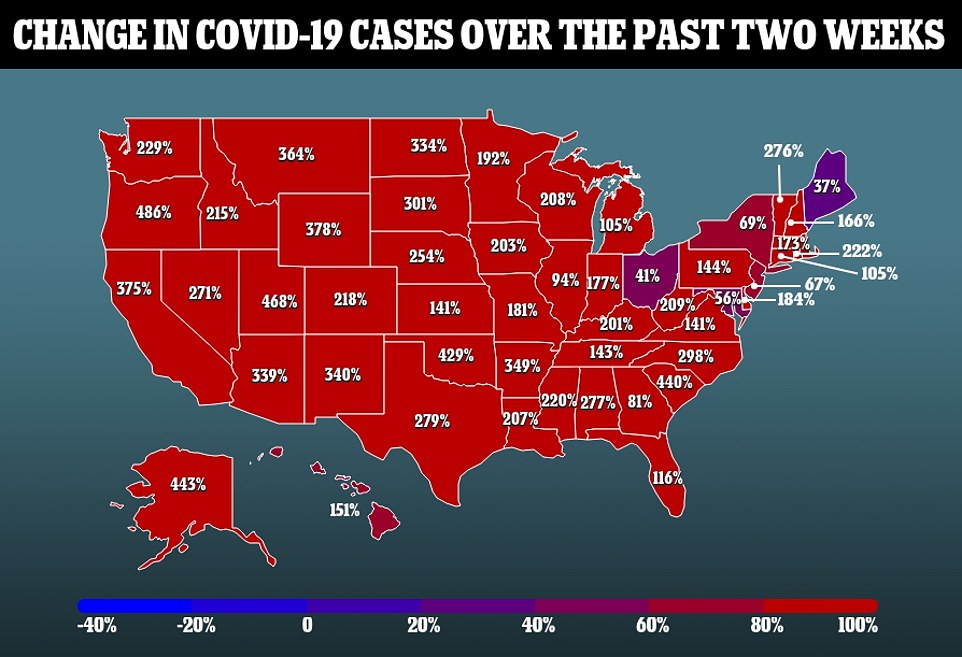 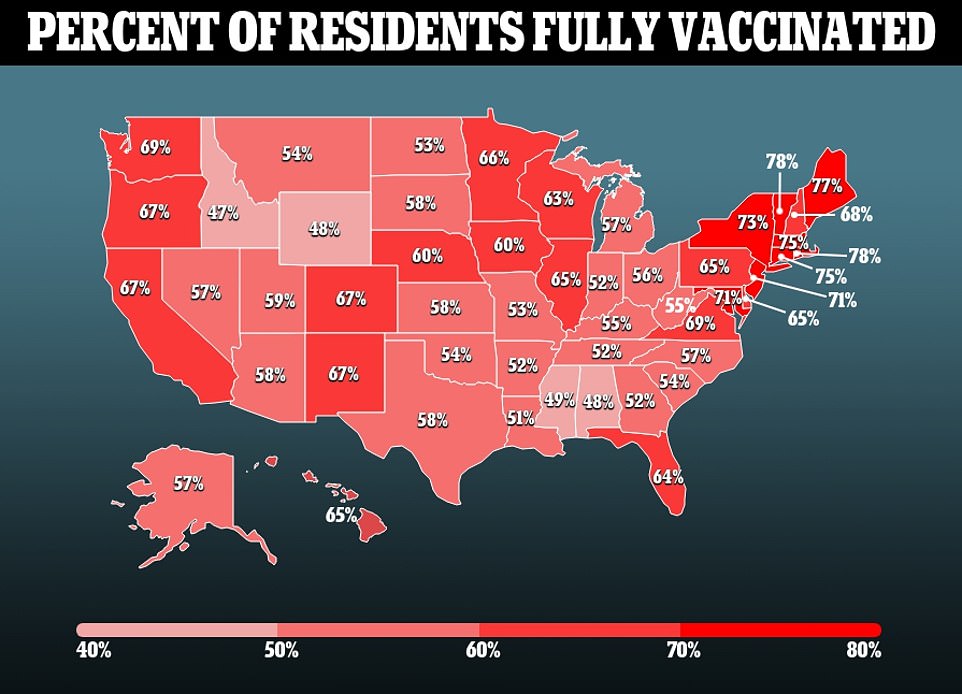 Large upticks among the western states comes as surges suffered on the east coast start to recede. New York, which experienced a ten-fold increase in cases when Omicron first arrived in December, is now recording an increase over the past two weeks of only 69 percent.

Neighboring New Jersey suffered a massive surge of cases as well – jumping seven-fold when Omicron first landed in December, but rising case numbers have since tapered off in the Garden state as well. Over the past 14 days, cases have increased 67 percent in New Jersey.

The two states are still among the nationwide leaders in infection rate, another sign that they are at the peak of their respective Omicron outbreaks.

Cases in the state have more than tripled over the past two weeks, up 276 percent over 14 days.

Three other states are also averaging a daily infection rate of over 300 cases for every 100,000 residents. Massachusetts, third in the nation with 345; Delaware, fifth with 308; and Florida, sixth with 305. All six states reaching that level of infections have vaccination rates of 64 percent or higher – beating the national pace of 63 percent.

Infection rates in many western states have not reached anywhere near the level of states in the northeast, even amid the surge in cases.

In Idaho, for example, cases are up 215 percent over the past two weeks but only 81 out of every 100,000 residents test positive for the virus daily. Montana is similar, with a 364 percent increase, yet only 103 out of every 100,000 residents test positive. Wyoming, Iowa and Nebraska are in similar situations. Each of these states also have large rural populations and are not as densely populated as many of their peers.

Maine is currently posting the lowest infection rate, with 74 out of every 100,000 residents testing positive daily, as the state on America’s northeast tip manages to control its virus situation despite the chaos in surrounding states.

South Carolina was the nationwide leader in case growth earlier this week, posting increases of over 800 percent at some points. The state has experienced a receding in case growth just as others have, with the growth rate slashing down to 440 percent out of Thursday afternoon. While the Palmetto state is still fourth in the US in two-week case change, the figure is rapidly shrinking.

Case growth rates are still high for much of the region. Mississippi, Alabama and North Carolina have all seen daily cases more than triple over the past two weeks. The infection rate in these states have still not reached the level of New York, New Jersey, and other leaders either, meaning there might still be some time before cases peak.

Following just behind are Delaware, with 1.11 of every 100,000 residents dying daily from the virus, and Pennsylvania, at 1.11.

Michigan has creeped back above one death per every 100,000 residents – reaching 1.08 Thursday – and Maryland has reached the mark as well despite a recent tapering off in case growth.