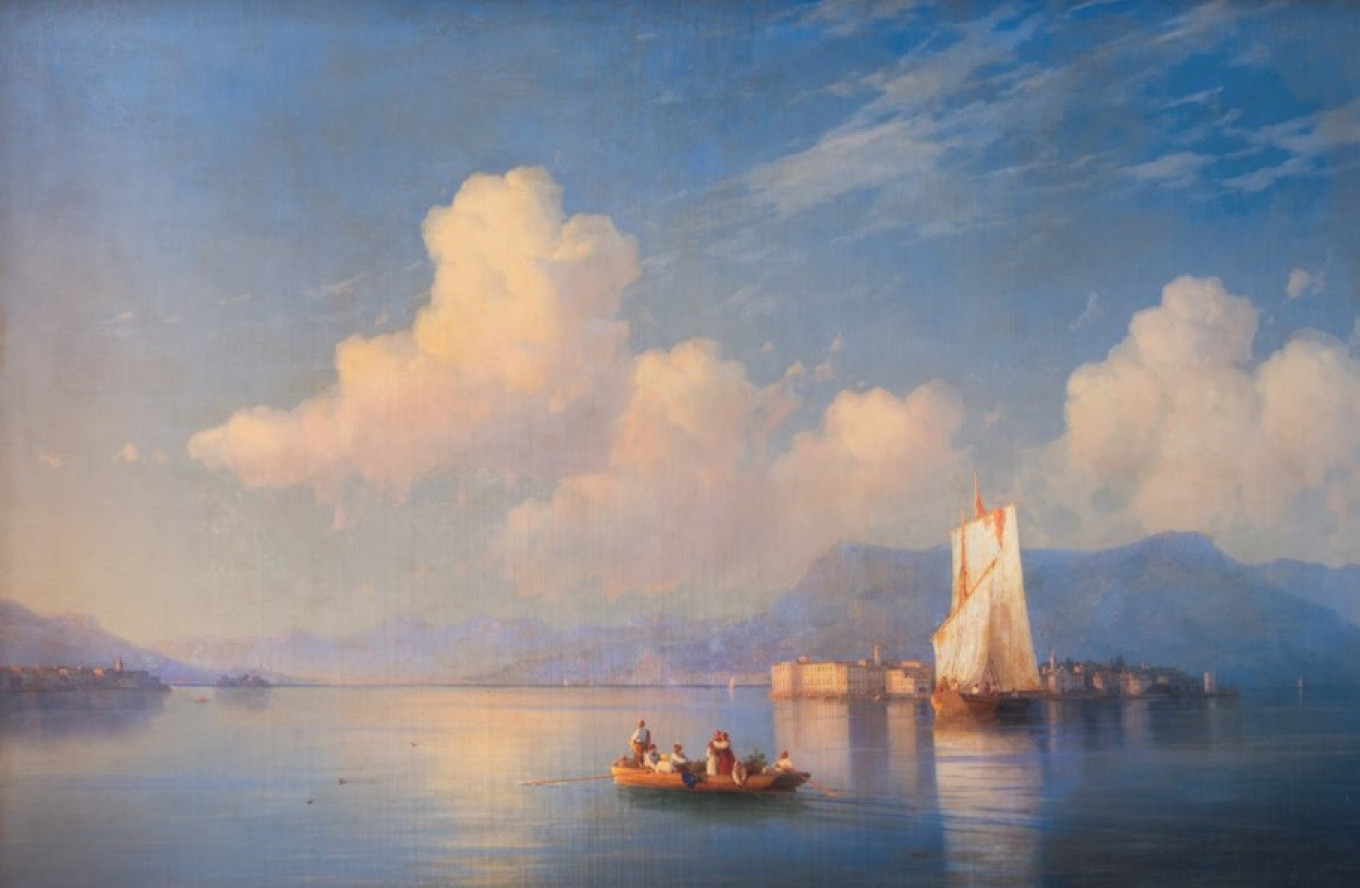 Puffed clouds hover under the ceiling of the Manege Exhibition Hall in St. Louis. Petersburg. They are made of plywood and radiate naive playfulness, and they seem to come straight out of an early 19th century theater performance. You almost expect to hear the sound of a thunderstorm made by knocking a piece of iron and sending large rocks rolling in a box.

The clouds welcome visitors to the place’s new exhibition, Peace and Joy, which takes the audience on a peaceful journey to everything idyllic, as depicted by the finest Russian painters of the 19th century.

This academic and rather formal display provides a striking contrast to the venue’s latest offering, which focused on digital and groundbreaking art that confronted the sufferings of Russian society. This time, the curators have created an oasis of calm and peace, and suggest that we dedicate some thoughts to the eternal joys that we often take for granted – nature, the home and our loved ones.

The exhibition features works by over 100 Russian artists such as Vladimir Borovikovsky, Vasily Tropinin, Silvestr Shchedrin, Orest Kiprensky, Karl Bryullov, Ivan Shishkin, Arkhip Kuindzhi, Mikhail Nesterov and Viktor Borisov-Musatov. The artworks come from the collections of 39 leading museums and galleries in and outside Russia.

Curated by Semyon Mikhailovsky, Rector of the Russian Academy of Arts, the exhibition can give the impression that you are walking through the halls of the Academy. But there is an important difference.

“The Manege exhibition does not feature fights, heartbreaking dramas, heartfelt passions, heightened emotions or frightening mystery,” Mikhailovsky said. “Peace and joy is an idyllic art history … Of course we know that history has seen a lot of tragedies, but we consciously focus on a world of goodwill and peace. The artists seek and find harmony in colors, shapes and proportions and in their serene motives, ”he said at the opening.

The display creates a kind of sacred territory of quiet and cozy domestic pleasures, Italian beautiful country, the unspoiled beauty of forests, lakes and mountains – all of which conjure up romantic episodes from our own lives.

Many of the paintings tell very personal stories about the artists themselves. Nikolai Kuznetsov’s 1879 painting, “Resting on a Holiday,” shows a young woman in a folk-embroidered dress lying on a meadow, apparently resting after work in the fields. Art historians believe that the woman is the artist’s future wife. Kuznetsov visited the family estate in Stepanovka quite often, and on one occasion he fell in love with a peasant girl. The family opposed the marriage, but after several years, the artist married his beloved.

The exhibition includes an unusual offering from the famous 19th century Russian artist Karl Bryullov, known for his romantic Italy-inspired masterpieces such as “The Last Day of Pompeii”, “Italian Midday”, “Italian Morning” and “Horsewoman”.

His work from 1849, “Nuns from the Convent of the Sacro Cuore sings for the organ,” tells the story of the artist’s lesser known hobby. The painting shows a quartet of nuns singing to rehearse with a small portable organ. Bryullov himself was an avid organist and even took the instrument with him during his travels.

“This exhibit feels a bit like a time travel,” Yekaterina Vasilieva, a visitor to the exhibit, told The Moscow Times. “I know many pictures from my childhood – there were some in my grandmother’s apartment. It’s an extremely comforting choice … exactly what many of us need in these turbulent and unpredictable times.”

In an attempt to further enhance the idyllic mood of the display, the organizers commissioned composer Anton Batagov to create the soundtrack to it. Batagov’s minimalist meditative work plays in the halls throughout the duration of the exhibition.

“When I was contacted with this request, it only took me a moment today, yes,” Batagov told The Moscow Times. “It is a highly unusual experience, different from composing a score for a film or a theater production. You get to talk to every single painting and you share your feelings through the music. It has been a very valuable experience. ”

In the footsteps of many 19th-century Russian artists, Batagov chose Italy – and its influence on Russian art – as its main source of inspiration.

“The Italian influence can be felt both in the painting and in the music,” he said. “The Divine lovely song melodies, collected by the Russian composers of the past, flourished on Russian soil in a completely different way – not as imitation, but as a new sonic reality, full of their own magic and a little sad joy. In the soundtrack to the exhibition, the Italian theme runs throughout the exhibition. ”

Even the interactive element of the exhibition has a nostalgic and romantic twist. Visitors can swing on one of the swings that hang right from the clouds. The only request from the caretakers? Do not swing too hard.

The exhibition runs until January 30, 2022. For more information, please visit the page here.