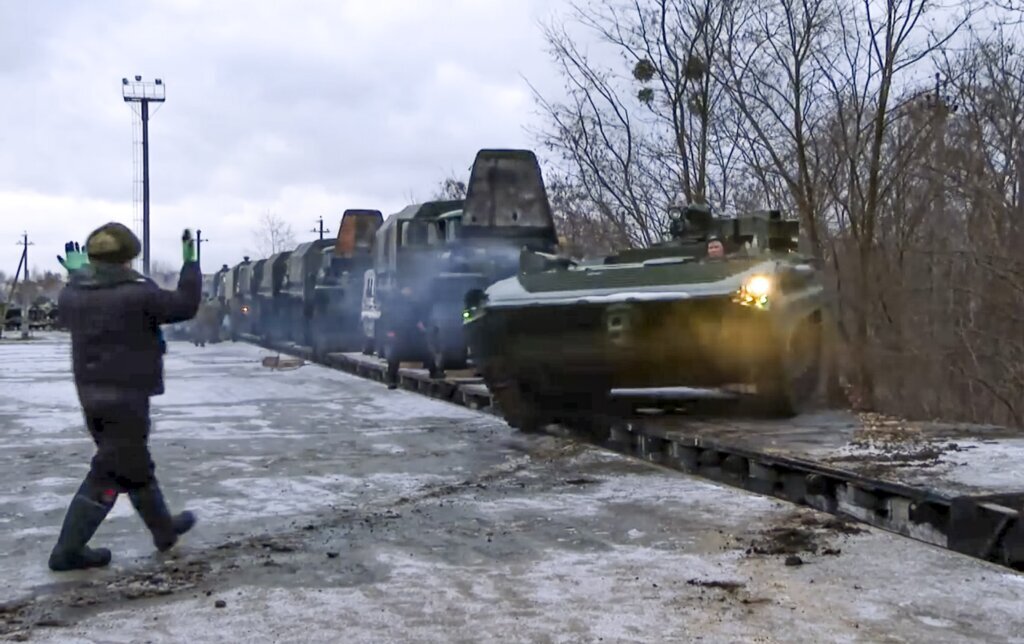 MOSCOW (AP) – Russia on Thursday accused the West of planning “provocations” in Ukraine, even though they accuse Moscow of …

MOSCOW (AP) – Russia on Thursday accused the West of planning “provocations” in Ukraine, although it blames Moscow for planning aggressive military action in the neighboring country.

Russian Foreign Ministry spokeswoman Maria Zakharova claimed that Ukrainian and Western claims of an impending Russian attack on Ukraine were a “cover to stage their own large-scale provocations, including those of a military nature.”

“They can have extremely tragic consequences for regional and global security,” Zakharova said.

She pointed to the supply of weapons to Ukraine by British military transport aircraft in recent days, claiming that Ukraine perceives Western military assistance as a “carte blanche for a military operation in the Donbas.”

Kremlin spokesman Dmitry Peskov said the US threat of a possible Russian cut-off from the global banking system could encourage hawkish forces in Ukraine to use force to regain control of the insurgency to the east. “It may instill false hopes in some representatives of the Ukrainian leadership, who may decide to quietly restart a civil war in their country,” Peskov said in a conference call with journalists.

Donbas, located in eastern Ukraine, is under the control of Russia-backed separatists, who have been fighting Ukrainian forces for nearly eight years, a conflict that has killed more than 14,000 people.

Ukraine said earlier this week that it has taken delivery of anti-tank missiles from Britain. It has rejected Moscow’s claims that it is planning an offensive to regain control of separatist-controlled areas in the country’s eastern industrial heartland.

The Ukrainian government, the United States and its NATO allies have in recent weeks expressed increased concern over a Russian troop build-up near Ukraine.

The concentration of an estimated 100,000 Russian troops near Ukraine has fueled Western fears that Moscow is ready to attack its neighbor. US President Joe Biden said on Wednesday that he believes Russia will invade Ukraine and warned President Vladimir Putin that his country would pay an “expensive price” in lost lives and a possible cut off from the global banking system if it does. .

Moscow has repeatedly denied plans to launch an offensive. But it has sought a set of security guarantees from the West that would preclude NATO’s expansion into Ukraine and other former Soviet nations and the deployment of the Alliance’s weapons there.

Washington and its allies vehemently rejected Moscow’s demands in security talks last week, but kept the door open for possible further negotiations on arms control and confidence-building measures to reduce the potential for hostilities.

Amid tensions, US Secretary of State Antony Blinken visited Ukraine on Wednesday to assure the country of Western support. He traveled to Berlin on Thursday to meet with his British, French and German colleagues to discuss Ukraine and other security issues.

Blinken will give a speech on the Ukraine crisis in the German capital later on Thursday, before flying on to Geneva, where he will meet Russian Foreign Minister Sergey Lavrov on Friday.

Ukrainian President Volodymyr Zelenskyy is scheduled to arrive on Thursday in Poland, an EU member who has long supported Ukraine’s efforts to move closer to the democratic Western world.

Deputy Foreign Minister Marcin Przydacz said in a radio interview on Thursday morning that Poland offers its political and diplomatic support to Ukraine, but he will not say whether military aid will be extended in the midst of Russian troop building.

“We are aware of how serious the situation is, hence our diplomatic activity,” Przydacz said on Radio RMF FM from the southern Polish city of Wisla, where Zelenskyy will visit Polish President Andrzej Duda on Friday.

The White House said Friday that U.S. intelligence officials had concluded that Russia had already deployed operations to rebel-held eastern Ukraine to carry out acts of sabotage there and blamed Ukraine for them in a “false flag operation” to create a pretext for possible invasion. , Russia has dismissed as “total disinformation.”

In a move that further strengthens forces near Ukraine, Russia has sent an unspecified number of troops from the country’s Far East to its ally Belarus, which shares a border with Ukraine, for major war games that run until 20 February. Ukrainian officials have said Moscow could use Belarusian territory to launch a potential multi-stranded invasion.

The Polish defense minister said Poland, along with offering support to Ukraine, is strengthening its own military capabilities.

“A firm policy is the best argument for an aggressive Russian policy, which is nothing new, and an appropriate response is important,” Blaszczak said.