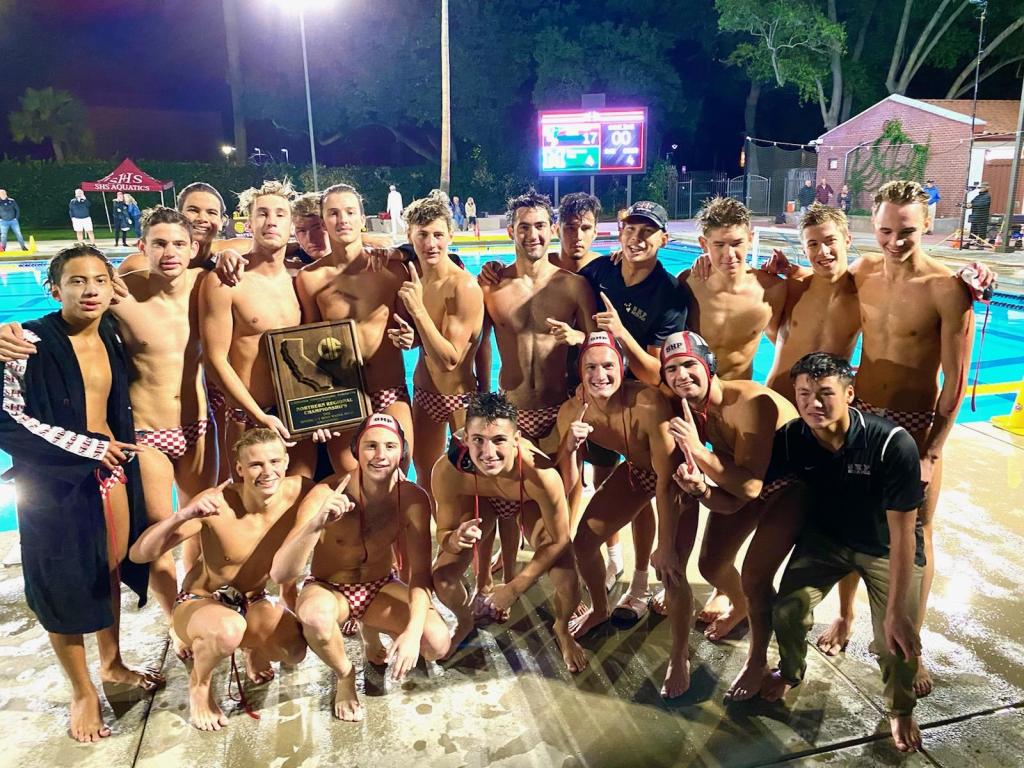 But should it be considered the best in not only the state but the nation?

“I do not think that is the case at the moment after everything we have done this year,” said SHP coach Brian Kreutzkamp. “Unfortunately, there’s nothing official about it, but I’m willing to go there if you are.”

Let’s take a closer look at the summary of the top-seeded Gators, who closed the season by taking a ceremonial dip in their home pool after a resounding 17-4 triumph over No. 3 seeded Miramonte in the NorCal Regional Division I championship game.

Along the way, SHP (27-3) was undefeated in the West Catholic Athletic League and Central Coast Section.

It also claimed first place in two of the most prestigious tournaments across the country – Elite 12 and North vs South invitations – by defeating SoCal powers Newport Harbor and Mater Dei.

“Obviously it’s up for debate there are no official placements,” Stanford-bound goalkeeper Griffen Price said. “But we let the season speak for itself.”

“We all beat top teams,” said Princeton-bound senior Luke Johnston. “And if there was a final in California, I think we would be there and we would win. But I’ll never know.”

In his 19th season, Miramonte’s coach James Lathrop goes out of his way to plan a preseason game against the Gators and Kreutzkamp in his 16th season.

The Matadors (16-11) struggled with beaks and claws in the first half and were trailing 6-2 at the break, but several 5-yard penalties and exclusion errors that resulted in power-play goals proved too much to overcome.

A month earlier, Miramonte lost 18-10 to Newport Harbor, the SoCal Division I champion after a 10-6 victory over Mater Dei.

So the question arises, is SHP the best team in the country?

Whether the Gators can claim a mythical national title or not, the fact that the previous season was lost in its entirety due to the COVID-19 pandemic added significance to this team’s performance.

“Once we’ve taken water polo from us, I know with this team that you just get a whole new appreciation, especially the seniors,” Kreutzkamp said. “At first we were just happy to have a season this year and be able to travel and play against the best teams in the country. And then the other part of it is what we wanted to get the most out of it.”

Price, Johnston, USC-bound Jack Vort and Luke “Bear” Weigle were all freshmen at the university in 2018 when poor air quality caused by Butte Fire canceled both the CCS and NorCal tournaments.

Twice in the course of four years, an opportunity to define their heritage slipped away for reasons beyond their control.

“A lot has been taken away because of things that have happened in the world,” Johnston said. “But we are so lucky that we can now play – and we can win.”

As it turns out, win with an exclamation point.

“They will be the first to tell you it all starts with Griff,” Kreutzkamp said. “When you have the best goalkeeper in the country, you can take many chances and you can make some mistakes. It just gives everyone confidence to go out there and swim. ”

The Gators left no sense of ambiguity while arguing for top billing in the country.

“Our whole season leads up to this point,” Johnston said. “So it’s the end of the season and we had to give everything we had.”

“We’ve been in a couple of championship games this season and we know how to act in those games,” Price said. “So we just came relaxed and loose.”

Look for Miramonte to beat SHP again this fall, though Lathrop will miss the influence of seniors such as Santa Clara-bound goalkeeper Owen Van Stralen, who made five saves, and Claremont McKenna-bound Donovan Davidson, who scored the first goal for the Matadors.

The future is bright for a young team that peaked at the right time and earlier in the week avenged a loss to De La Salle in a title game in the North Coast Section.

“I’m just really proud of the journey with this group,” Lathrop said. “At the beginning of the year, we were not ready to compete at that level, but we tried really hard to put the kids in situations to challenge them to improve, and they really got up for the opportunity. The last three weeks we have played our absolute best water polo. ”

Elsewhere, it was a different story for the girls from Miramonte, who as the No. 1 seed in Division I crossed to a NorCal title after an 11-4 round of No. 2 Davis.