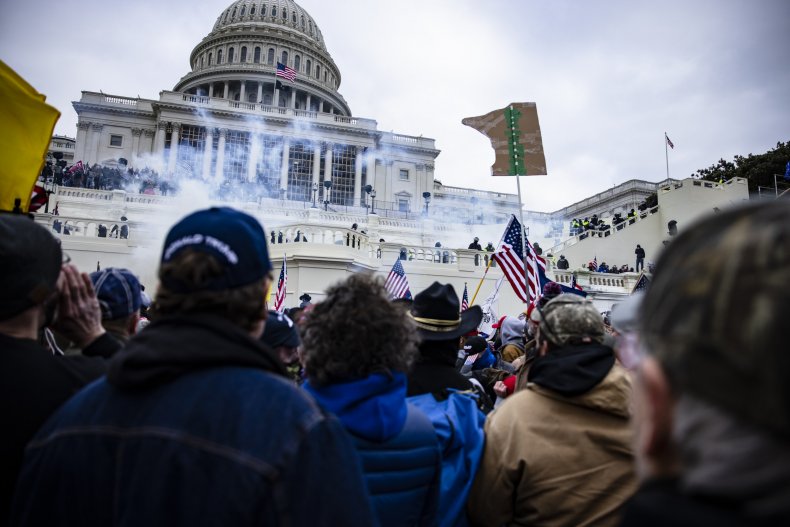 A member of the far-right Oath Keepers and two people accused of assaulting police officers are among those suspected of Capitol riots who have requested permission to travel to spend Thanksgiving with their family.

In the days leading up to the celebration of November 25, several suspects accused of participating in the January 6 attack and who have not been remanded in custody have made formal legal requests to make Thanksgiving travel plans without violating their conditions for release before the trial.

On November 18, WUSA9 reporter Jordan Fischer and NBC4’s Scott MacFarlane revealed that Judge Amit P. Mehta of the District Court of the District of Columbia granted permission for Oath Keeper Donovan Crowl to travel to her sister’s home to spend the holiday season with her between November 24 and November 26.

Crowl is one of a number of Oath Keeper members accused of some of the most serious offenses in relation to the Capitol attack.

Crowl was originally charged along with other Oath Keepers members Thomas Caldwell and Jessica Watkins.

They were then charged in a substitute indictment with 13 other people, all of whom were accused of conspiring to stop the certification of the 2020 election results at the Capitol on January 6th.

The Oath Keepers are an explicitly anti-government militia group whose members are preparing for a new civil war in the country. Members are said to have carried paramilitary equipment and formed a “stack” formation before storming the Capitol building.

Elsewhere, Capitol riot suspect Grady Owens was also allowed to travel from western Texas to Harris County in southern Texas to spend Thanksgiving with his family.

According to the court’s request, which was granted by a judge, Owens would travel with his family on November 24 and return on November 26.

Owens, 21, is charged with a number of serious offenses, including assaulting, resisting, or obstructing certain officers using a dangerous weapon, for inflicting bodily harm after allegedly attacking the Metropolitan Police Officer with a skateboard during the Capitol riot.

Owens pleaded not guilty to the charges against him in April and was released in May on bail conditions, including home detention, issued with a location monitoring unit.

Another suspect accused of attacking police officers on Jan. 6, who has asked permission to travel for Thanksgiving, is Joseph Hutchinson, who lives in Georgia.

Hutchinson is charged with offenses under Jan. 6, including assault, resistance or obstruction of certain officers or employees; and complicity and violent entry and disorderly conduct on Capitol territory.

He is accused of being part of a group that attacked police officers outside the Capitol building on January 6. He was charged with Olivia Pollock, 30, and Joshua Doolin, 22, while Pollock’s brother, Jonathan Pollock, 21, is still a wanted refugee.

Hutchinson is accused of supporting and pushing Jonathan Pollack when he used a shield to attack a police officer’s face and neck.

He is also accused of hitting an officer while on the ground, as well as grabbing the sleeve of another officer and throwing him out of the way during the disorder outside the Capitol.

As noted by MacFarlane, Hutchinson has applied to travel to his hometown of Lakeland, Florida to celebrate Thanksgiving – this is also where refugee Jonathan Pollack lives.

Despite the seriousness of some of the charges against the defendants, MacFarlane said courts tend to allow predetermined requests for short trips for suspects prior to their trials.

“Courts tend not to restrict travel more than they should before a case has been closed,” MacFarlane said, referring to a conversation with a former federal prosecutor.