Aletheia and Nelson Dueck were told on April 1 that they were pregnant with triplets.

Of course, the Palatinee couple thought it was a joke.

When they realized it was right, Aletheia Dueck had a panic attack: They had not planned to get pregnant again so quickly, let alone three times.

“I almost called the office that morning to tell my husband it was twins like an April Fool’s joke,” Aletheia said. “I’m so glad I did not, because the prank would have been on me.”

Panic attacks over, Aletheia, a stay-at-home mom, and Nelson, an engineer, had to get used to the idea that their family of five – including children Ayla at 6, Hazel at 4 and Benjamin at 2 – would become a family of eight.

The triplets are identical boys named Nelson, called “Nels”, Oliver, called “Ollie”, and Joseph, nicknamed “Joey”. They were born on August 24, also their father’s birthday, after 27 weeks and four days of pregnancy. 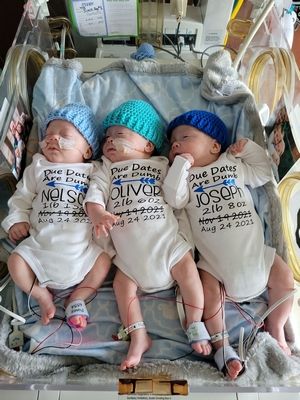 Aletheia and Nelson Dueck of Palatine had identical triplets in August. The pregnancy was a surprising addition to their three children of 2, 4 and 6 years.
– Lent by Aletheia Dueck

“My husband could hold a baby in his hand. His pink was the size of their arm,” their mother recalled.

The triplets spent months in the neonatal intensive care unit at Northwest Community Hospital in Arlington Heights, where “the nurses took care of us as much as they took care of our babies,” Aletheia said.

The babies had lung problems and had to be intubated. There were scary moments where they stopped breathing. All three underwent surgery for hernia in the groin. 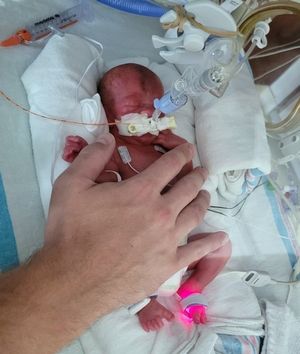 The Dueck family in Palatine had identical triplets born at 27 weeks and four days of pregnancy in August.
– Lent by Aletheia Dueck

“These little guys have been through so much,” their mother said.

Ollie and Joey were brought home on November 29th. Nels – who was diagnosed with chronic lung disease and must have oxygen – returned home on 23 December.

All three recently caught a respiratory virus that took them back to the hospital for a few days, this time at the Advocate Lutheran General Hospital in Park Ridge, which has a pediatric intensive care unit. They were home again Thursday.

“It hit us a little hard,” Alethia said. “It was like starting over and seeing them on oxygen again with a probe.”

Aletheia has documented the family’s journey on Instagram at @ourduecktribe, which has been therapeutic in treating her innumerable emotions, she said.

Fortunately, the older siblings’ triplets are doing well and have welcomed the little ones with open arms, Aletheia said.

Yet “we are in a way at our border,” she said. “We are stretched beyond what we can handle.”

To that end, the Palatinate resident Freyda Lewis organized one baby supply drive to the family on January 9th.

A mother of four, Lewis said she read Aletheia’s post on the Palatine Mom’s Club group on Facebook. So she sent her a friend request and the two started talking on the phone and found out they have a lot in common.

“I just felt this connection to her,” Lewis said. “My heart goes out to her.”

Lewis said her own family got a lot of help from people after her mother lost an arm in a car accident when Lewis was a baby. “I always felt it was the right thing to do, to give back.”

Duecks are really grateful for Lewis’ efforts, Aletheia said. “She has a really helpful heart. She’s so sweet.”

The family has also received help from Aletheia’s mother, who lives in Palatine, and Nelson’s parents, who are visiting from Canada, as well as members of Palatine Mom’s Club and The Church in Palatine, who have offered dinners and prayers.

“It has been a true blessing for us,” Aletheia said.

Triplets occur naturally in about one in 10,000 pregnancies, according to American Society for Reproductive Medicine. The chances of having identical triplets are even higher, with estimates ranging from one out of 62,500 to one out of 200 million.

The birth of Duecks’ triplets had a lot of hidden risk factors. Aletheia said she went to the hospital and thought she needed more fluids, but doctors realized Joey had broken her waterbag.

“They said to me, ‘You have to deliver today.’ I was so shocked.”

As it turns out, Nels’ hemoglobin number was so low that he would not have survived much longer. Mom got a placenta, also life-threatening.

“We really feel like God has been covering us all this time,” Aletheia said. 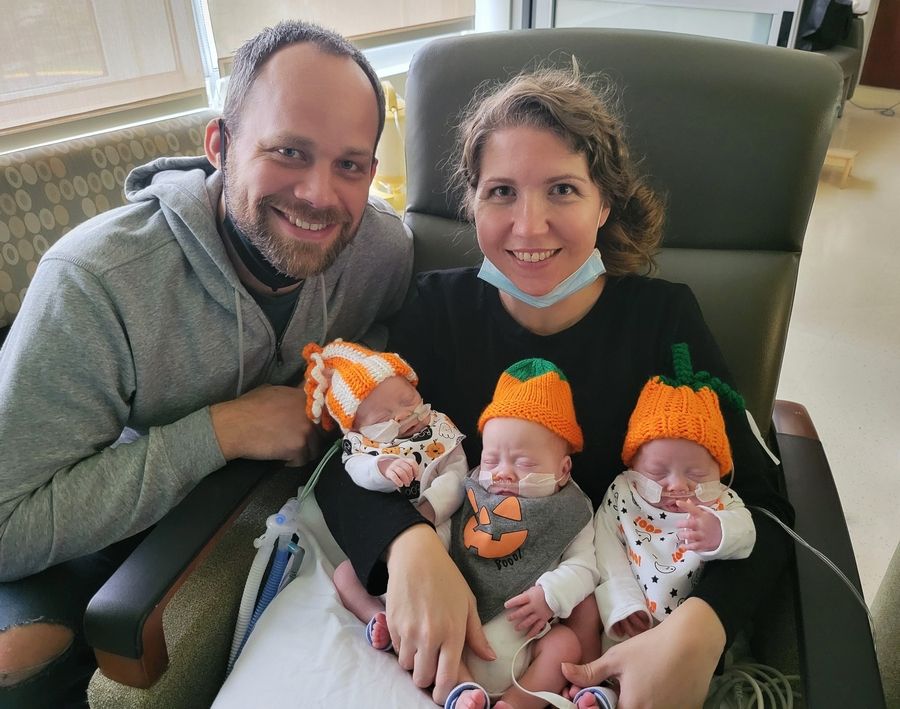 Nelson and Aletheia Dueck of Palatine had identical triplets – from left Nelson, nicknamed Nels; Oliver, nicknamed Ollie; and Joseph, nicknamed Joey – in August after 27 weeks and four days of pregnancy. This picture shows the first time their parents were able to keep them together.
– Lent by Aletheia Dueck

Now the triplets have quadrupled their weight and already have distinct personalities.

Nels is a social flirt who smiles when held tight and loves to be talked to. Joey is the fat one who pulls at his pipes, rolls around, loves to eat and seeks out people with his eyes. Ollie is the laid back person who is happy to be fed and left alone.

Nels has a birthmark on her back, but Ollie and Joey do not have a freckle to the difference, their mother said.

“They have velcro name bands on their ankles and wrists so we can distinguish them from each other.”