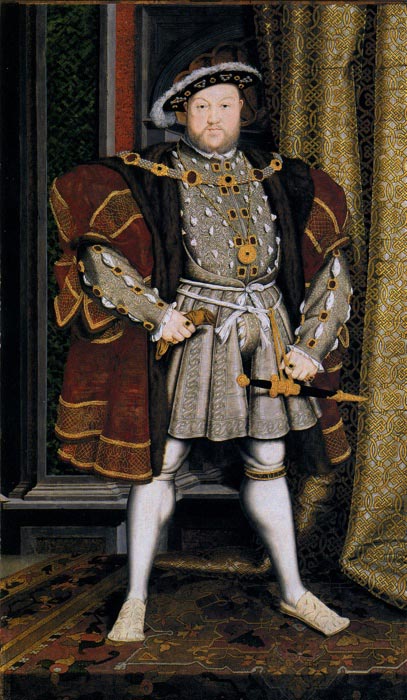 The German aristocrat Anne of Cleves was the fourth of Henry VIII’s six wives and married the king on January 6, 1540. Before Anne ever set foot on English soil, Henry sent his court artist, the German-born Hans Holbein, to the latter’s home country for to paint a portrait of his future bride, who was the sister of an influential Protestant duke.

The portrait Holbein produced, now housed at the Louvre in Paris, has often been considered flattering. But art historian Franny Moyle disagrees with this verdict, reports Daily mail . In fact, she believes that Holbein’s painting was not intended to glamorize Anne at all, but instead was intentionally made boring so that the king would not marry her.

Henry VIII orders a portrait of Anne of Cleves

In 1539, the three-married Henry VIII sent his representatives to Germany to end his most recent marriage arrangement with Anne’s brother, the Duke of Cleves, a town in northwestern Germany. He had asked his staff to send back a written description of Anne’s facial appearance. However, they could not, because Anne often wore high collars and veils that prevented her face from being seen.

But Henry was determined to find out what his upcoming bride looked like. He decided to send Holbein to Cleves to recreate her resemblance on canvas and rely on her favorite artist to produce an exact replication.

Holbein’s portrait showed Anne’s face clearly, even though her hair was hidden under a headdress. Her expression was blank and her eyes were half closed, giving her a drowsy look. Since Henry did not postpone the wedding after seeing the painting, it has been assumed that he must have been pleased with what he saw.

Anne of Cleves: A Little Flat, A Little Vanilla

But Moyle, who is the author of The King’s painter: Hans Holbein’s life and times , do not think Holbein tried to portray his subject as attractive. She believes that Holbein tried to show Anne of Cleves the way she really was, in terms of her mood, personality and physical appearance. Not necessarily uninteresting, but still not what Holbein thought Henry VIII was expecting.

“You don’t get many full-face portraits,” Moyle told listeners at the Cheltenham Literature Festival. “I think Holbein says she lacks dimension. She’s a little flat, she’s a little vanilla. “Assuming this was Holbein’s intention, it seemed that Henry did not understand the message. Perhaps the artist’s approach was too subtle, or his qualities as a painter too advanced to produce anything truly appealing. Even after seeing it, Henry VIII still arranged for Anne of Cleves to come to England, where she arrived on January 1, 1540.

When he first met her, however, the King was apparently severely disappointed. His representatives had warned Henry that Anne could not speak English, did not dance and had no sense of humor. For some reason, Henry chose to ignore these warnings, just as he had apparently overlooked the traces Holbein left in his painting.

After actually meeting Anne, he scolded his representatives for bringing him a “Flanders mare.” Such an insult says much more about the vanity and cruelty of Henry VIII than it does about the appearance of Anne of Cleves. But if Franny Moyle’s theory is correct, it shows that Hans Holbein really well understood the person he worked for.

Portrait of Anne of Cleves by the court artist Hans Holbein the Younger. ( Public domain )

A marriage – and divorce – of convenience

Despite Henry VIII’s disappointment, he still married Anne of Cleves five days after she arrived in England. He did so because marriage was strictly a political event from the beginning. Henry was eager to enter into an alliance with William, Duke of Cleves, because the latter was one of the leaders of the Protestant population in West Germany.

From 1539 onwards, there were indications that the two largest Roman Catholic powers, France and the Holy Roman Empire, might be on the verge of launching a combined attack on England. It was in fact Henry’s Prime Minister, Thomas Cromwell, who suggested that Henry marry the Duke of Cleve’s sister, as a way of securing military and political support from German Lutherans who were arch – rivals of the Holy Roman Emperor Charles V.

Within a few months of the wedding, however, it became clear that Henry VIII’s paranoia had gotten the best out of him. No alliance between the Catholic powers came to anything, and no attacks were launched against England, leaving Henry desperate to get out of his arranged marriage as soon as possible.

Just seven months after the wedding, the marriage between Henry VIII and Anne of Cleves was annulled by an Anglican ecclesiastical decree on July 9, 1540. Henry was able to secure this annulment by proving that Anne of Cleves had been engaged to the Duke of Lorraine’s son in 1535 , and that no official decree was ever issued annulling this commitment. In other words, Henry claimed that the Duke of Cleves had tricked him into marrying his sister illegally by hiding that she had not really been free and available.

To the great relief of Henry VIII, Anne of Cleves fully cooperated with this process. As a reward for her “service” to the king, Anne was given possession of Richmond Palace and Hever Castle, and she was also given the title “King’s beloved sister.” She was known for visiting the king’s court on occasion, and her relationship with Henry VIII in the years to come was known to be quite friendly.

Hans Holbein’s original portrait of Anne of Cleves was not the only picture he painted of her. He completed at least one and possibly two more miniature portraits of Anne, each showing her as a warmer and livelier person than she had shown in Holbein’s first painting. One of these miniature portraits in watercolor-on-vellum has always been recognized as Anne. It was made to fit into an inverted ivory miniature box and is currently on display at the Victoria and Albert Museum in London.

The second miniature, dated to 1540, can be found in the royal family’s royal collection and is marked as “Portrait of a Lady, Perhaps Catherine Howard.” This is a reference to Henry VIII’s fifth wife, whom he married in the latter half of 1540 after his separation from Anne.

But Franny Moyle disputes the accuracy of the label. She claims that this miniature actually depicts Anne of Cleves, and not Catherine Howard. If one carefully compares Holbein’s original painting of Anne with the miniature, she states that the resemblance is too obvious to ignore.

Moyle claims that this miniature from the Royal Collection of the British Royal Family is also a depiction of Anne of Cleves by the same artist. ( Public domain )

“They’re the same woman,” Moyle said The observer in May 2021. “She has this soporic expression in both paintings.” She also says the woman in the thumbnail is way too old to be Catherine, who was in her teens when Henry married her.

If Moyle is right, it seems Holbein liked painting Anne of Cleves. It is possible that his later portraits, which seem legitimately flattering, were his way of correcting to present her, as he did in his original image. It is said that Henry VIII became fond of Anne when he got to know her as a person, and perhaps Holbein had the same reaction.