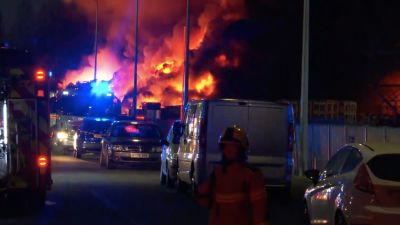 Firefighters spent the night at the scene of a large fire at a plastic factory in Hessle after black smoke was seen across the Humber.

Humberside Fire and Rescue has asked people to avoid the area while the incident is being handled, and to keep their windows and doors closed.

Thursday morning, seven fire trucks were left at the scene, and Humberside Fire and Rescue has said they believe they have extinguished the fire.

There are no casualties or injuries in the fire.

In a tweet, Humberside Fire and Rescue said they were making “good progress” and thanked the public for their kind messages.

The fire is at Bridgewood Plastics on Saxon Way in Hessle, and Humberside Police have said they are currently supporting the fire department to deal with the incident.

The company makes plastic shower vessels for the caravan industry, and it is believed that this is where the fire started.

There have been reports of explosions heard from the fire site, and some residents nearby have told ITV News that their home is without power.

An eyewitness told ITV News that the explosions at one point were about 10 seconds apart.

It is believed that the fire broke out around 3.30pm yesterday afternoon and within minutes the smoke could be seen from the other side of the Humber on the south bank and east of Hull on Hedon Road.

Motorists are also advised to avoid the Priory Way to the A63 area as there is a lot of black smoke in the area.

It is believed that the fire is centered around a number of buildings in a large industrial area.

It is understood that nearby factory and office buildings have been evacuated. Homes in the area have also been evacuated while the fire is being fought.