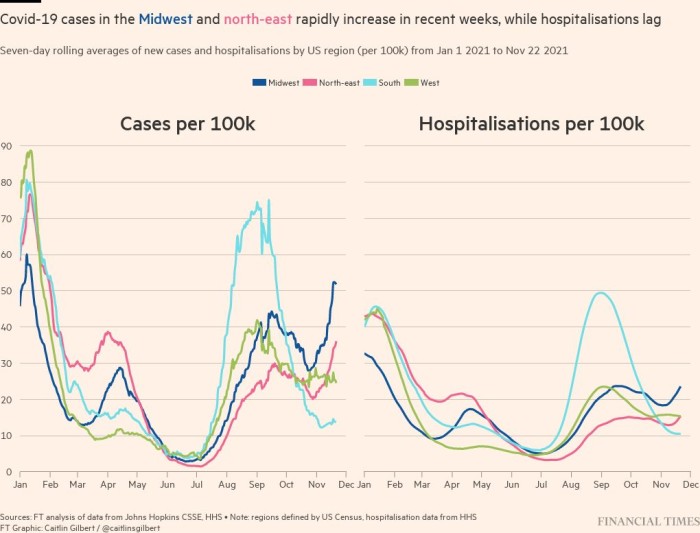 Twenty months into a pandemic that has claimed nearly 770,000 lives and nearly a year after Covid-19 vaccinations became available, U.S. health experts warn that a fifth wave of infections could overwhelm the health systems of the worst-affected states.

Fears of yet another rise in infections come at the forefront of the Thanksgiving holiday, where tens of thousands of Americans will travel to reconnect with their families, some of them for the first time since the onset of the pandemic.

But what was expected to be a party has been filled with danger in some Midwestern states, where vaccination rates are low and Covid-19 cases are rising rapidly after a summer break.

Even some northeastern states where vaccination rates are above 70 percent, such as Maine and Vermont, are experiencing an increase in the number of cases, a trend likely to reflect breakthrough infections caused by declining immunity to Covid jabs, according to epidemiologists.

So far, hospitalization rates in these states are not rising as fast as in the Midwest, suggesting that vaccines remain an important tool in preventing serious illness.

“We are preparing for the absolute worst,” said Andrew Jameson, an infectious disease doctor at Mercy Health Saint Mary’s Hospital in Michigan, a state where the daily Covid-19 case count has nearly doubled since early November.

Jameson added: “We are exhausted. It is difficult. The biggest burden is borne by the nurses, to be honest. We have lost so many critical nurses who have just left the edge of the bed completely.”

But the leap in infections are alarming health experts who warn that a nation with ample access to jabs is dangerously vulnerable due to low vaccination rates, politicization of mask wearing and social distancing, and rising public complacency.

“We are in the early stages of what will be a significant fifth wave,” said Eric Topol, director of the Scripps Research Translational Institute. He added that the United States was in a “worse position than all the countries of Western Europe”, some of which are fighting the third wave.

Just under 60 percent of Americans are fully vaccinated, compared to 69 percent in the UK, 79 percent in Spain and 86 percent in Portugal. The United States is in a similar position to many Eastern European countries such as Hungary and Poland, where hesitation with Covid vaccination is high and a deadly wave of the virus risks causing chaos in hospitals, according to Topol.

In the United States, political affiliation has been correlated with hesitation in vaccines, and unvaccinated adults are now three times as likely to lean on Republicans as Democrats, according to a recent KKF poll. The Republican Party has also stepped up its opposition to the Biden administration’s vaccine and mask mandates, despite recent leaps in cases.

At Mercy Health Hospital in Grand Rapids, Michigan, just over a fifth of the 350 beds are occupied by Covid-19 patients, a dramatic turnaround from the summer when virtually no one was admitted to the hospital.

Jameson attributed the deteriorating situation to the rapid spread of the highly contagious Delta variant, people taking fewer precautions because they were “burned out” by months of social distancing, and large pockets of unvaccinated people in some parts of the state.

“The patients who are in the intensive care unit and are sick are almost exclusively unvaccinated, but we see older [vaccinated] patients, typically 70- to 80-year-olds, hospitalized. These are people who may not have had such a good immune response “from their initial round of vaccinations,” Jameson said.

The Biden administration’s attempts to roll out a rapid booster campaign have been hampered by quarrels among government scientists. So far, only 18 percent of the fully vaccinated population has received a booster shot, most of them over the age of 50, according to government data.

The rise in Covid cases before Thanksgiving has meant difficult decisions for many families planning a holiday reunion.

Natalie Chaudhuri, a 21-year-old student at Georgetown University in Washington, said she had decided not to return to her home state of Texas, where both her parents are health professionals. Instead, she will meet her siblings in New York City.

Chaudhuri said she and her siblings had all been given a booster shot prior to the holiday and would be tested before and after the trip.

“I’ve been more concerned, especially since we saw a big increase after Halloween on campus,” Chaudhuri added. “But we’re a majority-vaccinated campus, so that’s helped me feel better about it.”

For many public health experts, it remains the key to increase vaccination rates to ensure that hospitals do not become overcrowded and the number of deaths does not increase.

“Just because we’re facing a fifth wave does not mean it has to be a deadly one,” said David Dowdy, an associate professor of epidemiology at Johns Hopkins University School of Medicine in Baltimore.

Dowdy said the difference between last winter’s deadly wave of Covid-19 and the upcoming rise was the far higher levels of immunity, primarily due to the vaccine.

He added: “This immunity may not always be enough to prevent someone from getting sick, but in most cases it will keep them alive and out of the hospital.”