He is a man with many industries, varied interests, different influences.

He grew up in an Irish Catholic household in Lombard, an “accomplished criminal” in his youth. He has been a boxer, bouncer, tattoo artist and bartender. He once played an ogre in a theater production in Chicago.

His collages and paintings merge his love of working people, public parks, birds, Dick Tracy comics and poetry. He is just as much a visual artist as a writer.

But if there was a job, a defining experience that is crucial to understanding Renaissance man Tony Fitzpatrick, it could be the concert that let him kick his shoes, light a cigarette and answer a boss for just four hours.

Fitzpatrick used to be a golf caddy. And a good one for that.

It should be noted that Fitzpatrick has never played the “silly game” in his life. But he has such a penchant for his caddying days at Glen Oak Country Club near Glen Ellyn because of the personalities he met around the golf course. Guys with names you no longer hear. Like Marv Carney and his son, Cleve, who turned a teenager Fitzpatrick into Picasso etchings and Hogarth.

“When I started making art seriously, he made it a point to seek me out and find my studio,” Fitzpatrick said.

He honors their friendship with his new exhibit at a museum named after Carney, the late Glen Ellyn philanthropist who supported Fitzpatrick’s creative pursuits and so many other artists in the Chicago area.

“Tony Fitzpatrick: Jesus of Western Avenue“opens Saturday at the Cleve Carney Museum of Art on campus at the College of DuPage. Fitzpatrick insists it’s his last museum show, and he’s completely at peace with it.

“It’s not the end of anything,” he said.

‘A heart of gold’ 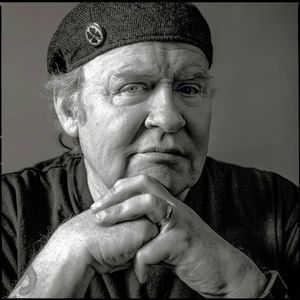 The exhibition provides a fitting bookend for Fitzpatrick.

He is a former student at Glen Ellyn School. It was here that he “corrected” his compass and had instructors who encouraged a multi-dash career.

Like Carney, former university president Harold McAninch left an indelible mark. As Fitzpatrick describes him, McAninch was not the type of ivory tower. You could level with him.

So when McAninch asked him about his future, Fitzpatrick gave an honest answer.

“I told him I did not know if I was going to be an actor or an artist,” Fitzpatrick said. “And he says, ‘Well, hell, kid do both.’ And I thought I met a genius that day. “

Fitzpatrick recalled the formative years at COD during a unveiling of his murals off Main Street in downtown Glen Ellyn. The two launched the DuPage Public Art Project, an initiative led by Diana Martinez, director of the college’s McAninch Arts Center, to create public art and events around the county.

“He’s a bigger person than life with a heart of gold,” Martinez said of Fitzpatrick.

One of his murals shows a cardinal, and the other a red-bellied woodpecker, both surrounded by an intricate collage background. Cardinals were his mother’s favorite bird.

“Like these birds, Tony Fitzpatrick has spent most of his career and life in Chicago and the greater Chicago area, where he has also had a forefront of the complexity, beauty, and diversity that define this place,” says the Cleve curator. Carney Museum, Justin Witte said at the mural event last month. “Tony’s work reflects this experience and is unique in its deep connection to the city of Chicago and our surrounding community.”

Fitzpatrick found himself more emotional than he expected to dedicate the murals “to the people of Glen Ellyn.” 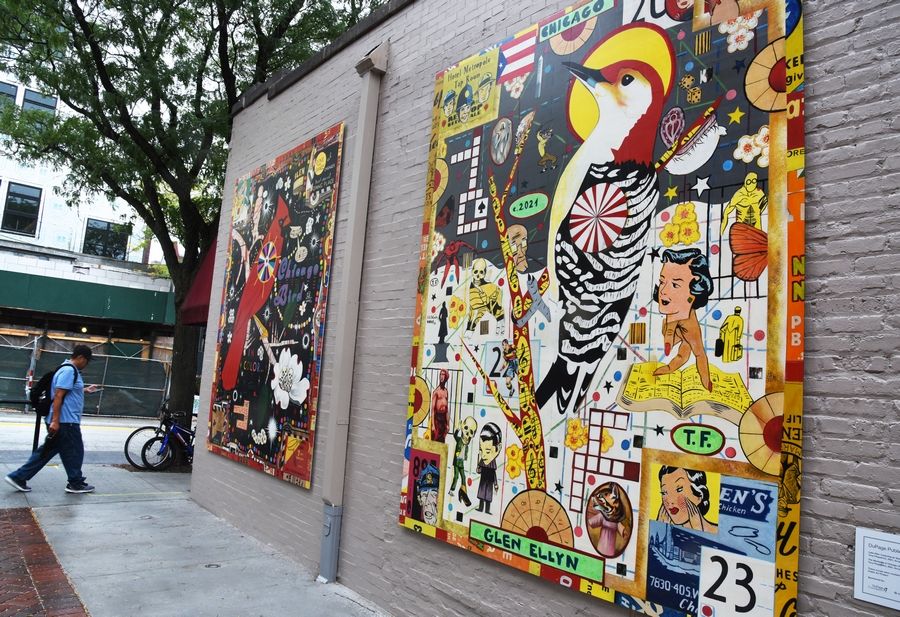 Fitzpatrick has reached the stage in his career where his ambition for institutional recognition “drifts away like leaves in a pond.” The Metropolitan Museum of Art, the Museum of Modern Art and The Art Institute of Chicago all house his works in their permanent collections.

“It’s time for 62-year-old white guys to get out of the way. I’ve got mine. My career has rewarded me,” Fitzpatrick said. “I want to make some institutional wall space for people who do not look like me. Black artists, brown artists, Asian artists, LGBTQ artists, people who have traditionally been underrepresented.”

And institutional setting, Fitzpatrick said, was never really his jam.

“That said, the two best institutional people I’ve ever worked with are with Justin Witte and Diana Martinez, and they should give lessons in how to do it because they do it right,” Fitzpatrick said. “They have been nothing but accommodating, nothing but kind, only generous in spirit.”

“Jesus of Western Avenue” will feature more than 60 of his works, reflecting two different ideas: the sacred and the unholy, Fitzpatrick said.

“I really feel like this show makes a cumulative statement,” he said.

But again, that is not the end of anything. His murals in Glen Ellyn and outside Chicago’s Steppenwolf Theater encouraged Fitzpatrick to start a public art firm with his studio partner, Danny Torres. More murals are on the way. He publishes a book of poetry, “The Apostles of Humboldt Park.” And he still wants to do gallery exhibitions.

“If you’ve done anything right with your work at all, it ultimately belongs to the public, and it belongs to a culture,” Fitzpatrick said. “And that’s a bit of my new ethos, and I’m a little stuck with that.”

The tickets to get into his College of DuPage show? For free.