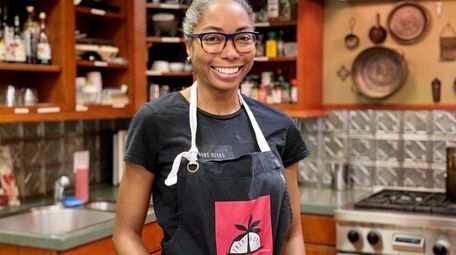 Good parking has been responsible for more niche eateries on Long Island than you might think. Whether their background is Chinese or Nigerian or Thai or Ecuadorian, local restaurateurs have realized that the trip to Queens or Brooklyn combined with the lack of parking once they get there is a good reason to open a comparable place in it (relatively ) parking blessed. the counties of Nassau and Suffolk.

At least that was what inspired Renee and Courtney Davis to open Trini Bites in Lynbrook. “We were so frustrated having to walk all the way to Liberty Avenue in Queens for food from Trinidad,” Renee said.

In April, Trini Bites debuted its weekly pop-up takeaway on Atlantic Avenue in Lynbrook, in what for many years was A La Carte Cooking School and is now a rental kitchen. Every Saturday between At 8am and 8pm, customers can get the true taste of Trinidad – while their cars rest in the spacious space behind.

In the kitchen, Renee uses two spatulas to handle a roti (rich flatbread) cooked on a cast iron stawa (pan). “It’s not meant to come out flat,” she explains, “it’s meant to look like a cracked cloth – that’s why we call the dish ‘bus-up bites’.”

Each of Trini Bite’s bus-up bites is a roti accompanied by a protein – curry chicken, curry beef, curry shrimp or a vegetarian mix of chickpeas, callaloo greens and potatoes. If you think that sounds a bit Indian, you’re right. More than a third of Trinidad’s population has roots in India, descended from Indians who were brought to the Caribbean as contract workers. The island is also home to a small Chinese community, which Trini Bites honors with fried wontons, filled with either curry chicken or curry beef.

Also available are doubles, a Trinidadian street food consisting of fried bread with a filling of curry chickpeas (i.e. channa dal). “They were so good, people always wanted two of them, so they started calling them doubles,” Renee said. Doubles are a good excuse to drip four of Davis’ homemade “accents”: tamarind sauce, cucumber chutney, mango chow (chutney) and spicy “peppa” sauce.

Both Davis grew up in Trinidadian families in Brooklyn, but did not meet until they were students at the University of Buffalo. Courtney continued to be a financial advisor; Renee received a nursing education and led the company nursing education at Northwell before traveling in 2018 to focus on their three children. But they were both passionate about food in general, and food from Trinidad in particular, and had long talked about opening their own restaurant.

During the pandemic, they decided it was time to hit the trigger. Unable to find the right place for a restaurant, they decided to get their feet wet with a weekly pop-up that would allow them to perfect their recipes and start cultivating a customer base. As predicted, they have attracted Trinidadians from the immediate area, but also non-Caribbean from such points east as Baldwin, Freeport, Centerport and Islip.

One thing Renee Davis misses as a takeaway meal provider is the opportunity to see her customers enjoy the food. The restaurant they hope to open, she said, will be laid out like a sushi bar, “so people can watch us cook and I can watch them eat.”

Erica Marcus, a passionate but skeptical omnivore, has been reporting and commenting on the Long Island food scene since 1998.