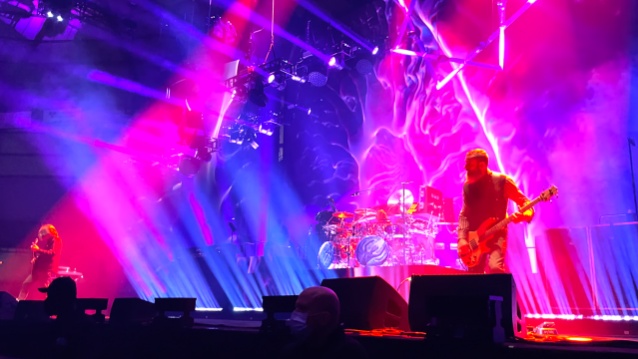 TOOL performed the song “Culling Voices” for the first time ever during the band’s concert last Saturday, January 15 at the Golden 1 Center in Sacramento, California. Fan-filmed video of the performance, which started with all the members sitting in front of the stage and the drummer Danny Carey playing guitar next door Adam Jones, can be seen below.

“Culling Voices” is taken from TOOL‘s latest album, “Fearful”, which arrived in August 2019, after many years of anticipation. The LP debuted as No. 1 on Billboard‘s Top 200, which broke sales and radio records while gaining widespread critical acclaim.

TOOL started its 2022 tour in support of “Fear inoculum” on January 10 at Matthew Knight Arena in Eugene, Oregon. It marked the band’s first live performance since March 2020, where TOOLs hike was interrupted after a concert in Portland, Oregon due to the burgeoning pandemic.

A year ago, TOOL singer Maynard James Keenan revealed that he fought COVID-19 twice in just a few months. He told “Conch” on Apple Music hits that he suffered another COVID-19 infection around “mid-November [2020] and ended up in the emergency room on December 1. “

Keenan previously discussed its first battle with coronavirus in October 2020, says AZ Central that he suffered from symptoms of the disease in February 2020 and was still recovering eight months later. “I’m still dealing with the remaining effects,” he said at the time, “but it was ugly. I survived it, but it was not pretty. So I definitely had to deal with it.”

Two weeks ago it was announced TOOL was one of several artists who used specially trained sniffer dogs to discover COVID-19 at their shows. The dogs are able to sniff for traces of the virus on all backstage involved, including members of the band’s crew and entourage.

TOOL was honored with one Grammy in the category of “Best Metal Performance” in the pre-telecast ceremony at the 62nd annual Grammy Awards January 2020 at the Staples Center in Los Angeles. TOOL was nominated for “7empest”, a trace from “Fear inoculum”.