The Marvel Universe is host to not only several classic superheroes but just like many fiendish villains who face them. Many of them, such as Green Goblin, Doctor Octopus, Magneto, and The Kingpin are some of the most iconic supervillains in comic books. Their popularity has been fairly consistent, while other villains, such as Thor’s brother Loki, have enjoyed fame much more recently. Sadly, another “recent” hit villain only briefly got a taste of the limelight.

The Hood was a villain who debuted in a mature audiences Marvel book before being used in various mainstream comics. This made him one of the most prominent Marvel villains for quite a while, but it did not stop him from just as quickly fading into obscurity. His lack of media appearances has not helped him in this regard, either. Here’s how The Hood went from Marvel crime prince to villainy pauper. 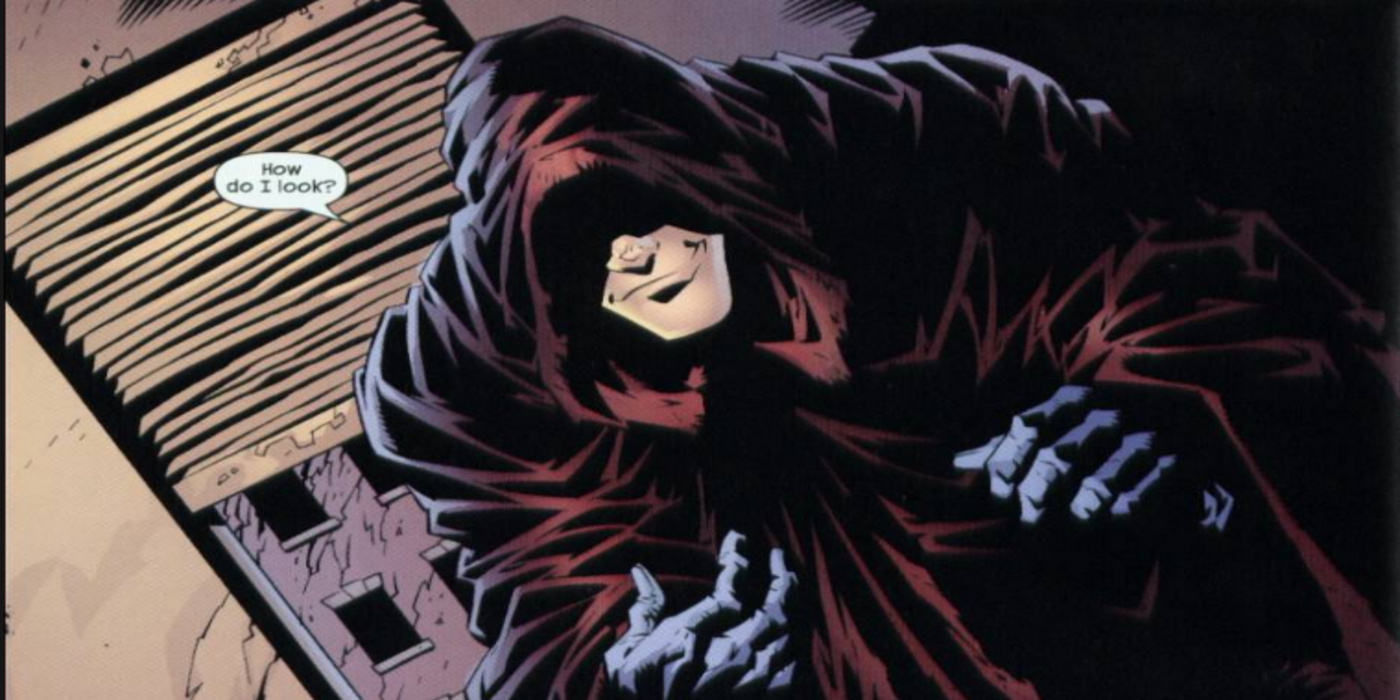 The Hood was created by Brian K. Vaughn, Kyle Hotz, and Eric Powell, debuting in the eponymous The Hood # 1. This title was part of Marvel’s MAX imprint, which featured mature, graphic content with more street-level characters. The Hood was born Parker Robbins, the son of a crook who had worked for Wilson Fisk in the past. Growing up to become a criminal in his own right, one fateful con job led Robbins to encounter the Nisanti demon. After seemingly killing the creature, Robbins stole its cloak and boots. Finding that the artifacts are imbued with magical power, Robbins uses them to levitate and turn invisible. He uses these gifts and his own streetwise mentality, “The Hood,” as Robbins would become known, quickly became a force to be reckoned with in the Marvel criminal underworld.

The Hood’s empire of supervillains was composed of multiple heavy hitters, all of whom had their own specialties. Their ranks included speedsters, mad scientists, assassins, magicians, and fellow Marvel criminal masterminds, all of whom had loyalty bought by The Hood’s seed money stipend. The Hood and his army would become a huge thorn in the side of the Avengers, namely during Brian Michael Bendis’ run on their book. This prominence would continue through big events such as Secret Invasion, Dark Reign, spirit Siege. Sadly, this time in the spotlight would not last, even with The Hood forming his own version of the Illuminati. Temporarily losing his cloak and powers, The Hood’s brief loss of his titular article of clothing would spell doom for his popularity. Since then, The Hood has not really been of any real importance, and that seems unlikely to change anytime soon.

RELATED: Spider-Woman Isn’t Connected to Spider-Man – Is That a Mistake?

Why Was The Hood Forgotten So Quickly?

The Hood has had very few appearances outside the comics, and none of them have been of any real significance. They mostly involved video games, with the biggest of these, the video game adaptation of The Amazing Spider-Man 2, suggesting that this version of The Hood did not really have supernaturally empowered clothing. Part of the reason for this lack of use in other media, namely in cartoons, may be the fact that his powers are derived from a demon. This arguably makes him a bit harder to use in more kid-friendly cartoons and perhaps even in the mainstream Marvel Cinematic Universe.

Speaking of the spooky, The Hood is sadly caught between two thematic worlds. Though his cloak and boots are magical, he’s not really a magic-based character. He’s certainly no threat to Doctor Strange or even someone like the mystical Brother Voodoo. On the other hand, the magical nature of his “powers” means that The Hood might not fit in as well with the street-level or scientific world of Daredevil, The Punisher, or Spider-Man. He would actually be a good foil for lunar vigilante Moon Knight, who similarly walks between the back alleys of macabre. Until such a story uses this as an opportunity to bring him back into the mainstream, however, it seems that The Hood will be a villain who was only big in the 2000s.

Mephisto’s Most Unusual Form Finally Has A Canon Explanation

Timothy Blake Donohoo is a graduate of the University of Tennessee at Chattanooga, where he majored in Communication and minored in Creative Writing. A professional freelance writer and marketing expert, he’s written marketing copy and retail listings for companies such as Viatek. In his spare time, he enjoys reading, playing video games, watching documentaries and catching up on the latest Vaporwave and Electro-Swing musical releases.