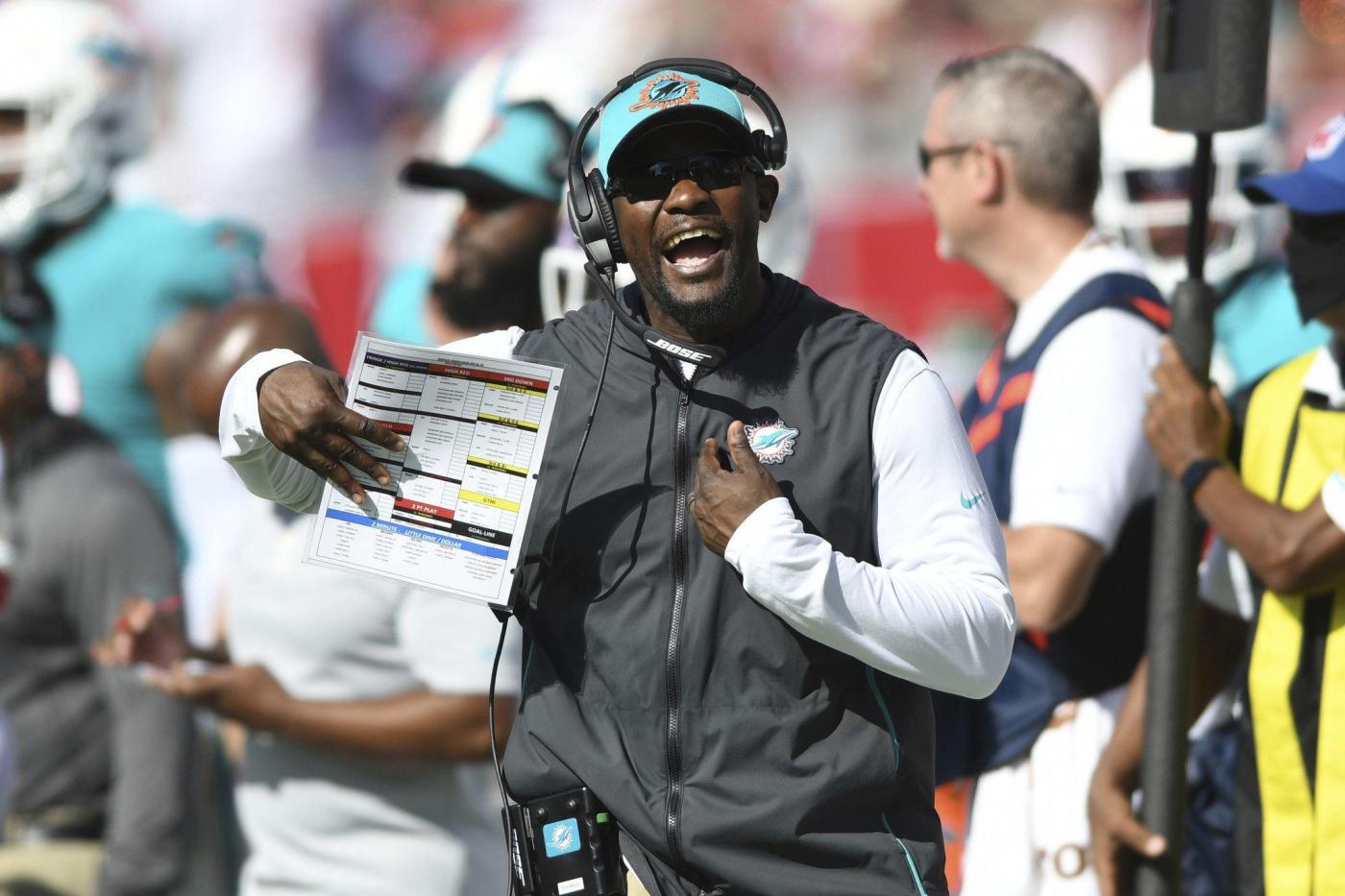 Throughout most of the first half of the Miami Dolphins’ season was there controversy that it is unclear who called offensive play between co-offensive coordinators George Godsey and Eric Studesville and quarterbacks coach Charlie Frye.

The latest set of questions about play-calling has shifted to the defense.

With coach Brian Flores seen holding play sheets and communicating into his headset while the defense is on the field, observers during the Dolphins’ back-to-back victories against the Houston Texans and Baltimore Ravens have wondered if Flores really calls play over defensive coordinator Josh Boyer.

“In the end, it’s just my job to make sure we get the right calls in there on game day,” he said. “There are sometimes during timeouts or in between series that we can discuss it while we go, but it’s really a non-story. I do not know what people are watching.”

Various spectators have pointed to the playing sheets Flores has on the sidelines, but Boyer insists Flores has them for each of the three phases of the game.

“He has all three call sheets on game day. I would say Flo is very involved if it’s in the kicking game, offensively and defensively,” Boyer said. “There are definitely times when he intervenes in the game. There are other games where he just says, ‘What do we have here?’ He does so many things during the game. It’s hard to point to one or the other. I’m not sure what people see, one way or another. ”

From Flores’ side, he volunteered without being asked that Boyer called the defense against the Ravens on Thursday night.

“I think Josh did a good job of calling the game, calling it aggressive,” Flores said in response to a question about some of the strategy used to curb quarterback Lamar Jackson and the powerful Baltimore offense.

He also answered a direct question after the victory over Houston, saying Boyer called the defense on Nov. 7.

As for the playing sheets, they did not just show up in last week’s two matches. Flores can be seen holding them in pictures of him on the sidelines in games ahead of recent victories over the Texans and Ravens.

Bake on the edge

Part of the aggressive battle plan against Jackson on Thursday, in addition to the powerful lightning in safety Jevon Holland and Brandon Jones, involved playing Jerome Baker on the edge of the outside linebacker for a significant number of snaps.

Baker did not put up his usual team-leading tackling numbers that he has when he is on inside linebacker, with four plus a quarterback stroke, but having his speed on the edge was a key to discouraging Jackson’s ability to run.

“Lamar Jackson is a pretty fast guy, right?” said Dolphins outside linebackers coach Rob Leonard. “So I just generally think you want speed on the track when you have a lot of speed that you have to take into account.”

Baker played all defensive snaps on Thursday, and his versatility allowed various other defenders to get into different places. Outside linebacker Andrew Van Ginkel was on 67 of 73 snaps. Jaelan Phillips played about half of the pieces. Elandon Roberts’ snaps were down 38 percent, while inside linebacker Duke Riley was also involved in about a third of defensive play with Baker seen more on the edge.

It was something the defensive coaching staff knew it could be comfortable with on a short week of preparation for a difficult offensive to limit.

Leonard added: “Bake can do a lot of things. He’s a pretty good guy and he helped us play on the edge.

And the different position coaches can adapt to what is requested by a particular player based on matchups.